Year of the Carnivore

The director's statement for this film says that it "mixes elements of classic cinema such as slapstick, camp, film noir, and the "Hollywood Kiss", with the lesser-told story of a desperate young woman trying her best to get 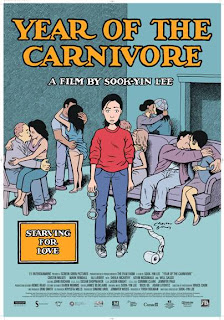 good at sex". Hmm... seen another way, you could say that Year of the Carnivore is a movie that's going in too many directions and can't quite decide what it is.

At its heart, it's the story of Sammy Smalls, a 21 year old woman who gets rebuffed by her crush-semi-boyfriend-hopeful because he says she's no good in bed. Cristin Milioti as Sammy (pictured below) is the strongest part of the film. Her big, dark eyes and little girl looks are perfect for the sympathetic role of a clueless young woman who can't seem to get it right. See, she had some kind of disorder as a child, and her leg was irradiated, so the leg is crooked and she walks funny, and wears two pairs of jeans to bulk it up so she looks normal. Er.. well, more about that later.

Stage and screen veterans Sheila McCarthy and Kids in the Halls' Kevin McDonald, always watchable, try what they can with one dimensional roles, as do most of the other lesser characters. Between bouncing back and forth between the slapstick, camp, film noir and all that, first time director Sook-Yin Lee forgot to give us real characters. The scenes come along all as set ups for punchlines that don't entirely pay off - although the one where the married couple she babysits for ask her for help in the bedroom to reignite their own passions does come close. We have the obligatory scene where the object of affection has a supposed revelation (you know, that one the guys in rom-coms have where they realize they really don't want a life of glamourous bachelorhood, they really do want to settle down with the Girl Next Door type who's been waiting for them patiently) but it comes out of nowhere. 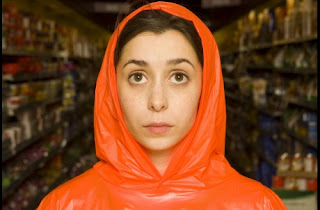 Oddly, the much talked about sex scenes and sexual content serve only to set up the jokes, and all we see are PG14 boobs (sometimes not even that). The sex scenes aren't hot enough to be sexy, and most of the time not madcap enough to reach the level of farce. In desperation, Sammy, who works as a store detective in a grocery store, takes to blackmailing shoplifters into teaching her about sex in the woods out back. Shy and awkward about her sexuality, but suddenly bold and brazen with complete strangers. And here's another odd thing - when Sammy has her obligatory revelation (you know, the one where the tomboy puts on make-up, heels and slinky dress and suddenly becomes a sex bomb) underneath that double layer of jeans she's... completely normal looking, except for a "scar" that's too obviously drawn on her upper thigh. She's not overly skinny, she's not disfigured, and boy can she dance all of a sudden.

Year of the Carnivore could have been a film about an awkward girl learning about sex, but it got lost in too many rom-com/slapstick/film noir/et cetera clichés along the way, and entirely forgot to get us to care about any of these people. It's too bad - I wanted to like this film.
canadian film cristin milioti independent film kevin mcdonald sheila mccarthy sook-yin lee year of the carnivore