Acting on the World Stage - Conference in NYC

New York City's La MaMa ETC will play host to an interesting conference this September that looks at the role and possibilities of using theatre as a tool to build peace. There is an address for Theatre Without

Borders in New York too, but its members are typically scattered across the world - as I found when I went to ask for an interview. I eventually did get hold of Catherine Filloux, a Fulbright Senior Specialist and playwright, and one of the group's co-founders.

"After September 11, a group of theatre artists founded the group," she says, "we were working internationally. I worked a lot in Cambodia - work to do with genocide and human rights. I'd been embraced before, but after that, there was a chill." She cites a growing list of visa problems for artists trying to collaborate and work abroad, including up to the present day, trying to iron out paperwork for Cambodian artists attending the conference.

At its heart, the group is about maintaining global connections in their art. "It came from a desire to create collaborations," she says. "It's a completely volunteer run, grassroots organization." It's an informal, non-partisan group that's connected in the virtual world if not always by geography. "Projects can be initiated by a person or group," she explains. The website includes resources, international contacts, projects and news, among others.

The conference has a number of co-presenters, among them Brandeis University. "One thing we've been working on with Brandeis University is a book on theatre and peace building in conflict zones." That book will be presented to kick off the conference's opening night on September 23, along with a screening of the documentary film of the same name.

You can check out the trailer here. 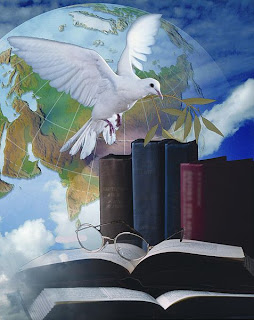 The book of case studies culminates many years of work, and she cites Cynthia Cohen and the Coexistence Program at Brandeis as being key to the project. Offerings at the conference will take a variety of forms, including speakers, workshops, and panel discussions like Catherine Filloux's own roundtable - Aftermath: Human Rights and Recovery, where she'll be the Facilitator. And never fear, there will be many performances sprinkled throughout as well. Delegates, speakers and performers are scheduled to come from many of the areas of the world where TWB is active, which include Rwanda, Nigeria, Sierra Leone, Liberia, The Sudan, South Africa, Romania, Serbia, Bosnia, Croatia, Cambodia, Guatemala, El Salvador, Peru, Argentina, Iraq, Iran, Israel, Palestine - among others. There will also be an exhibition of Burmese art.

"It's needed in the world," she says of both the conference and its message. "reaching both the theatre and pace building communities. The goal is to reach the largest number of practitioners in either field, and offer things that work."

More detailed information about the conference, including an agenda, at this link.