I'll let the pictures and video clips do most of the talking for this past weekend of dancing and music and oh so much food! It certainly doesn't cover everything that took place, but here's a smattering of what I was able to take in, hopefully with a glimpse at the sheer variety of what was on offer.

Mohamed Diaby and Manding Foli Kan Don
A native of the Republic of Guinea in West Africa, Mohamed Diaby has been playing the jembe since the age of seven, when he was taught by his brother.At age 15, he began performing professionally, first all over West Africa, moving to NYC and then Atlanta. He now calls Toronto his home base, and has formed Manding Foli Kan Don, a troupe dedicated to bringing the traditions of Manding culture to the world. Their high energy show has a universal appeal.

Doody le Tigre, aka Fritz-Edwin Jocelyn
Born in Montreal, Doody spent his childhood in sunny Haiti. Today his band members come from around the world and his music combines the sounds of Caribbean, Latin and African music - all influences he finds in Montreal. He's a very charismatic performer, and a great dancer too - much to the ladies' delight.

Soul Influence
Their members come from Zimbabwe, Zambia, Kenya and Ghana, and the group sings African spirituals and gospels in Zulu, Shona, Ndeble, Bemba and more along with contemporary gospel. They were really impressive, and it's not surprising they've performed for dignitaries and with artists like Nelly Furtado, Alicia Keys and Thomas Mapfumo (my hero).

Kae Sun
I only caught the end of his set, but liked his assured stage presence and a style that blends his Ghanaian roots with North American influences as diverse as Neil Young, Bob Dylan and hiphop.

Occidental brothers Dance Band International with Samba Mapangala
This Chicago-based band is led by guitarist Nathaniel Braddock, an instructor at Chicago's Old Town School of Folk Music. Their acclaimed CD Odo Sanbra gives the nod to infectious Ghanaian highlife, and for the last couple of years they've teamed up with Congolese singer Samba Mapangala. We were lucky enough to hear them both with and without the East African legend. I love that highlife!

Muna Mingole
Sunday's programming had a distinctly - and I think welcome - feminine thread to it in two very strong acts that closed the show. Muna was born in Paris, and then came to Toronto at age 2. She returned to Cameroon with her family later, where she discovered her musical roots. Based in Montreal these days, her band includes members from Québec, Senegal and Algeria in mixed genders, and her talents include both singing and dancing. She has a tireless and charismatic stage persona.

I missed the end, and Zimbabwe's Chiwoniso, so in apology I'm including a vid of my favourite song of hers, Wandirasa. 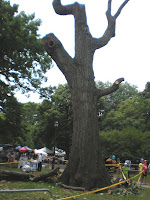 To close, here's a pic of the tree whose branch fell down (I think just after Doody le Tigre's set on Saturday) - minor injuries to several people from what I hear. I was nearly in that very spot not two minutes before it fell, completely spontaneously. This was taken Sunday, after the authorities had obviously had a go at it.
a cappella african music afrofest 2010 cameroon music caribbean music doody le tigre ghanaian music Mohamed Diaby Muna Mingole samba mapangala toronto arts event