I haven't really given much focus to visual arts lately, so I thought that's what I'd do at Expressions of Brazil - with a little samba and a couple of chicken tostadas thrown in too, naturally. 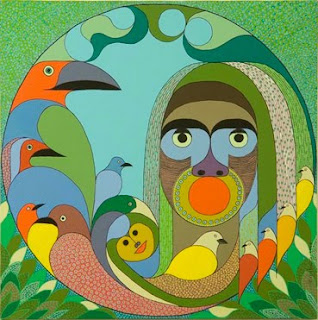 Emilio Boschilia
This artist's work is easily likable.With a preference for bright, saturated colours and motifs from the natural world as well as those of the indigenous people of Brazil, the eye catching compositions have a universal kind of appeal, and one that you'd definitely associate with Brazil.

Chris Harrison
It was Chris Harrison's work that I first saw when I went into the exhibition, and Chris himself that I more or less stumbled upon. He said he was quite honoured to be the only Canadian included in the show, and his documentary style photographs capture two contrasting cities - the moody and impersonal architecture of Sao Paulo, a city of 18 million, and the carefree beach vibe of Salvator, Bahia.

Renato Soares
This photographic artist's work really intrigued me. The subjects of his images were indigenous people in their entirely unselfconscious nudity, painted with yellow, green and red symbols and geometric shapes. Part documentarian, the images were "cropped", faceless and abstracted into the shape of limbs and coloured lines, making contemporary art out of a timeless aesthetic.

Soraya Montanheiro
This photographer's work has been widely publishedin her native Sau Paulo, and features a fashionista's sense of style with a very Brazilian flavour. The colours are hot and bright, and her models wear designs inspired by the regios - orchids, berries, an African headdress and so on.

Ivana Panizzi
This multimedia artist often uses unconventional materials. Her series of photo montages set people in flickering motion inside bottles of various shapes, the transparencies and motion playing against each other.

Gabriela Greeb
This artist's video installation is described as "water and receptables in a continuous flow", and the results are both poetic and mesmerizing. Water is really a fascinating subject in visual arts, and here it's mainly the motion that is central to the experience of the piece.

Avi Neto
Born in Brazil but now Toronto based, this artist's paintings are figurative with a surrealistic bent to them, and a bit of a humour too. "Scent of a Woman", for example, features a classic seated woman with a flower for a head, her foot a root  coming up from the ground.

I'll leave you with a clip of Sambacana, a Toronto based ensemble whose music is rooted in the traditions of samba and northeast Brazilian. They mix traditional folkloric elements with jazz and an urban pop sound, featuring singer Aline Morales along with John Yelland, Wagner Petrilli, Luis Guerra and Alan Hetherington