on July 24, 2010
Edmonton will see an album release and the return of Kozak rock July 27 - from a media release:

Recreating traditional Ukrainian melodies with a twist, Edmonton’s Ukrainian folk-fusion band The Kubasonics celebrate their latest album, Kubasonics IV: Play, with a CD release party July 27 at the Edmonton Event Centre (2556 West Edmonton Mall). Tickets are $35, on sale now at the Ukrainian Bookstore (10215 97 Street), online at www.ticketweb.ca and by calling 1-888-222-6608.

The Kubasonics rely on a large variety of instruments, including the tsymbaly, drymba, violin and bass, to create their sound, a unique blend of traditional Ukrainian folk, garage rock, ska, pop, punk and polka. Eight of Edmonton’s finest musicians contribute to Kubasonics IV: Play, including a brass and a percussion section, as well as back-up vocalists.

The evening features a rare appearance by Ukraine’s Carpathian ska band and Kozak rockers, Haydamaky, returning to Edmonton for a Night of “Kozak Rock”. 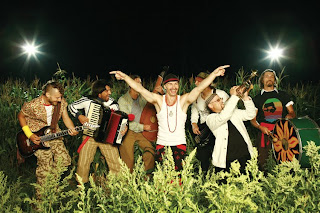 Haydamaky, Ukraine’s famous Carpathian Ska band and EastBlok Music recording artists, fuse the sounds of reggae, ska, punk and traditional Ukrainian music – Haydamaky have cleared the path for a new wave of Ukrainian music dubbed “Kozak Rock.” Hailing from Kyiv, Haydamaky have been entertaining European audiences for over a decade. Named after the historic rebellions of the Kozaks and peasants in the 18th century, Haydamaky share the same rebellious spirit of their namesakes in their music.

The first Ukrainian band to sign with British recording label EMI, Haydamaky released their eponymous debut album in 2001 and have since recorded numerous other critically acclaimed albums. The huge success of Bohuslav, released in 2004, expanded the reach of Carpathian Ska through Central and Eastern Europe.

Following 2006’s Perveziya (Perversion), Haydamaky signed with EastBlok Music, where they released Ukraine Calling. Kobzar, released in 2008, furthered the band`s distinct sound, mixing rap, dub, reggae and ska, with the rich authentic sounds of the bandura. Haydamaky have toured throughout Europe and North America headlining many festivals (including the 2009 Toronto Bloor Ukrainian Festival) and are scheduled to perform at the Calgary Folk Festival July 22-25, 2010.