on July 06, 2010
NEeMA
Watching You Think
Sony Music Entertainment (2010)
Produced by NEeMA in association with Leonard Cohen and Pierre Marchand 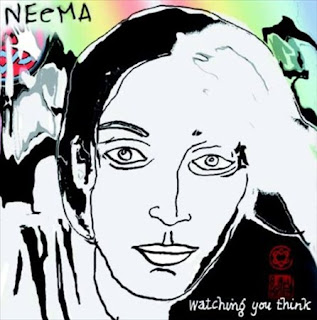 On stage, her presence is as charming and unaffected as an intimate vocal style that ranges from soft and girlish to a hard edged alto. The lyrics betray her roots as a poet, thoughtful and insightful of the nuances of life and love.

If the music of Montréal's NEeMA is hard to categorize - rootsy pop with shades of global and jazzy beats -  you can most likely credit it to her wide ranging resumé and a life spent largely off the beaten path. Born in MTL to a family of Egyptian and Lebanese decent, she includes working with street kids in Egypt and with Tribal elders managing Wekweti, an isolated First Nation community in the far north in her work experience. Still, there was one thread that ran through it all.

"Writing was always a part of it. I've been writing poetry since I was 7, then I wrote my first song in grade school - words and melody," she says. "I wrote intensively at different times in my life, then came back to it. If anything, I've always considered myself a writer."

The family background was in the sciences, an environment where writing for a living is looked on as something of a frivolous fantasy. "I did a management degree," NEeMA says. A certain creative restlessness had begun to take hold, though, and loving travel, she arranged to complete her last year in Australia. Even while busy with other endeavours, the pieces gradually began to come together. "In the mid-1990's, I learned to play guitar while I was in Australia." She's also studied dance, theatre and photography. "I took photography as an elective, and I spent days in the darkroom."

Once finished her management degree, the idea had been to return to Canada, and law school. By this time, however, she knew that a corporate lifestyle was not for her. "I'm interested in stretching the limits of what's possible. We don't really know what we're doing here, but we have great potential. I don't like to see my life all planned out."

And so the roundabout path to a musical career continued. "While working in Egypt with street kids, I got heavily into music. I found a wonderful voice teacher, and a guitar teacher," she says. Finally back in Canada after a few years, she then took a detour to the Northwest Territories and Wekweti. "I would go hunting with them," she remembers, among many other aspects of life in the north. With a natural curiosity for discovering other people's way of living via culture, it often left little time for writing or music.

"I never thought I'd grow up to be a musician. Music, doing it seriously as I am, I know it's a hard life. I tried doing a lot of different things, but I kept getting drawn back to it." Her 2006 debut album Masi Cho was independently released and garnered a lot of attention, fueling a growing career that led her to two sold-out shows at the Montreal International Jazz Festival in 2009 (pictured) - and the attention of her next producers, Leonard Cohen and Pierre Marchand. "These people really inspire me."

Her second CD, just released features musicians Howard Bilerman, Tim Kingsbury  (Arcade Fire), Tom Mennier (Martha and Rufus Wainwright), Joe Grass and Miles Perkin (Lhasa de Sela), and Gurpreet Chana (Nelly Furtado). "With my second album, I thought - this is my craft. I have a very deep desire, an obligation almost, to keep pushing further." The music and lyrics reflect all her influences, with writing itself continuing to be a major focus. "It's almost like a therapeutic thing - my way of trying to untangle what goes on inside me. I think that's why people connect to it." The unforced and unpretentious directness of her lyrics is quite affecting - I have to confess she had me at the song she wrote for her dog. (How could I not fall for someone who wrote a love song for their dog?) "With Leonard's influence, I work on it until I'm saying what I really want to say - going as deep as I can."

This summer she'll be found crossing the country supporting the new CD - some dates are listed below, but check her website for more details.