Montreal, June 30, 2010 – Starting today, the National Film Board of Canada (NFB) has its own iPad app, available free of charge at the iTunes Store or at the NFB’s download page.

One of the first Canadian film apps for the iPad, the NFB app allows users to enjoy over 1,000 NFB docu- mentaries, animated shorts and trailers, streamed over Wi-Fi and 3G wireless networks. It includes a selection of films in 3-D and stunning high definition. Users will also be able to download and store a film for up to 48 hours, for off-line viewing.

The app has the same features as the NFB’s iPhone app but has been optimized to take advantage of the inherent qualities of the iPad.

The NFB’s iPad application builds on the success of its popular iPhone app, launched last fall. The NFB’s iPhone app was selected as one of the best apps of 2009 by iTunes Canada and named Best Use of Content in 2009 by TheAppleBlog. Since its launch in October 2009, the NFB’s iPhone app has been downloaded more than 235,000 times, with 821,000 film views, as of June 1, 2010. 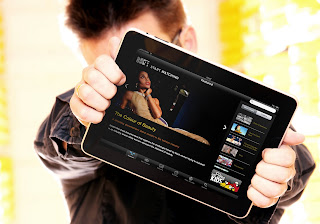 The NFB’s online Screening Room offers unique programming in both English and French. Since its launch in January 2009, the Screening Room has garnered over 5 million views and widespread critical praise. The NFB’s website has also been was selected as the Best Online Video Portal at the Canadian New Media Awards.

About the National Film Board of Canada

Canada’s public film producer and distributor, the National Film Board of Canada creates social-issue documentaries, auteur animation, alternative drama and digital content that provide the world with a unique Canadian perspective. The NFB is expanding the vocabulary of 21st-century cinema and breaking new ground in form and content through community filmmaking projects, cross-platform media, programs for emerging filmmakers, stereoscopic animation – and more. It works in collaboration with creative filmmakers, digital media creators and co-producers in every region of Canada, with Aboriginal and culturally diverse communities, as well as partners around the world. Since the NFB’s founding in 1939, it has created over 13,000 productions and won over 5,000 awards, including < a href="http://nfb.ca/oscars">12 Oscars and more than 90 Genies. The NFB’s new website features over 1,600 productions online, and its iPhone app has become one of the most popular and talked about downloads.
canadian film film download independent film ipad app NFB