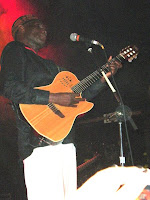 There were so many African events in Toronto this past weekend it was hard to decide what to take in, but having missed seeing Oliver Mtukudzi in concert last time around, I couldn't pass up the chance to make up for that now.

You'll see my interview piece at the link, actually from that last time he was in town in November 2009.

Opening up for the Zimbabwean legend was the Tichaona Maredza Quartet, formed by self taught Zimbabwean born Tichaona Daniel Maredza. Based on the acoustic guitar, his music combines the rhythms of his native country with Afrojazz. His lyrics are inspirational and hopeful, and this was his band's second tour opening for Oliver Mtukudzi. The remaining members of the band are Larry Lewis on lead guitar, Andrew Mark on drums and Tichaona Gombiro on bass. His set started with a slower, more laid back tempo, but soon had the audience dancing along with him. 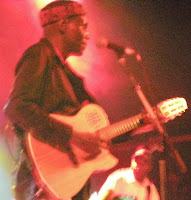 I have pics of Oliver but no video because he made it quite clear he wanted none taken. In fact, I err... seem to have him on video saying that filming wasn't allowed. But, it's a video that will remain forever private out of respect for the man's wishes.

You'll just have to take my word for the fact that, after all these years and despite the recent loss of his son - which he mentioned in passing, his son having played with him on his last visit to the city last fall - Tuku is still having fun playing music. He danced with the members of his band like nobody's business, singing with that trademark full, warm baritone, and had the huge, packed, sweaty and dancing crowd at the Opera House in the palm of his hand. 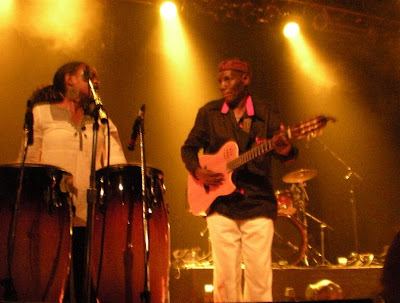 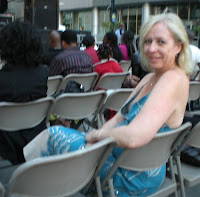 On Sunday, I went downtown to Metro Hall for the Bana y'Afrique Festival, just to have an ice cream, enjoy the perfect weather and listen for a while. (And someone caught me on camera!)

One of the acts was delayed in traffic, so in true African fashion, they threw together an impromptu collective of drummers and dancers to keep the stage lit up. I'll leave you with a little bit of it - the dancers are Coco, Simbo & Jahmez, drummers Amadou Kienou, Amara Kante, Nation, Mohamed Diaby, and one other whose name I don't know (but if you do, pass me a note and I'll add him too).