on July 22, 2010
I'll have more on SummerWorks Theatre Fest coming soon, but in the meantime, you can catch a FREE (like gratis!) preview of All of Him, an interactive biography as theatrical experience - from a media release:


All of Him - FREE preview before SummerWorks opening!

Written and performed by Tanya Pillay
Directed by Jajube Mandiela 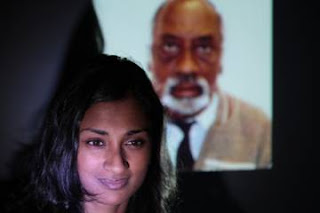 All of Him – An interactive biography of a jovial father with a dark past…a live, local talk show! Cheer and smear collide as you consider and discuss typically taboo subjects without fear of provocation or injury.

Patron Warning: This show contains nuts and sexual content in the narrative.

Theatre peeps - you will likely appreciate the full design @ SummerWorks, but come to this preview if you might not have $10 to spare between August 5-15.

NO COST but donations toward production costs always welcome.

PLEASE NOTE: THIS PERFORMANCE WILL BE FILMED AS PART OF A DOCUMENTARY FOR TELEVISION. THERE WILL BE SEATING PROVIDED FOR THOSE WHO DO NOT WANT TO BE FILMED.


More about the piece:

DOES THE TELEVISION EVEN TRY TO ANSWER YOUR QUESTIONS?

TORONTO, ON (2010/07/22) – Those who choose television over theatre may need to revisit that choice: a genre of theatre that really upstages the old tube can be found in Tanya Pillay’s All of Him.

Meet a jovial father with a dark past who asked, “Is that all there is to me?” All of Him is a live biography of Tanya’s father, Pat Pillay’s life and death. This  “relational” storytelling, reality/documentary theatre piece treats the audience as a community, with open dialogue throughout the piece.

This evolution of collective meaning rather than the usual consumption of television and traditional theatre bypasses the artifice and demonstration of theatrical performance. All of Him is more real than reality TV because Tanya narrates the story as her self (no acting!) in complete honesty based on real-life events, and audience members may interject at any time if they feel something needs elaboration or clarification.

The story chronicles Pat’s entire life as reported by him through humourous, relatable anecdotes. With the rules of interaction being imposed on Tanya rather than the audience, all interaction is completely voluntary and left up to the discretion of audience members. Tanya provides rare transparency as the audience receives increasingly personal family information such as birth defects and criminal accusations. 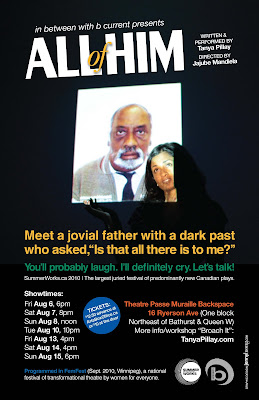 Tanya says her favourite thing about the show is “the way each audience can take it in a completely different direction. For example, when I presented the piece to a personal development group, they were especially interested in my perspective as a hypnotist. In contrast, a group of young newcomers to Canada became very focused on discussing spirituality and bereavement.” That’s right. Tanya is also an NGH-Certified Hypnotist for motivational purposes. But not to worry, there will be no hypnotism in this show.

Programmed in the SummerWorks Festival (Toronto, August 5-15, 2010,) the largest juried festival in Canada featuring predominantly New Canadian plays and FemFest (Winnipeg, September 25-Oct 2, 2010,) an annual celebration of transformational theatre by women for everyone, All of Him has garnered tremendous support and exposure since it’s inception and first presentation at rock.paper.sistahz 2009 festival thanks to the mentorship and co-production with b current performing corps, the only professional Canadian company which develops original theatre works reflecting voices from the Canadian Black diasporic communities.

If you can’t catch the Summerworks 7-show run at Theatre Passe Muraille Backspace, the show is easy to tour to any gathering space for groups interested in opening discussion about difficult topics for community growth. Tanya and director Jajube Mandiela have even designed a follow-up emotional-awareness workshop, Broach It!, in response to past audience requests for practical tools to manage difficult situations.
b current performing corps canadian black theatre summerworks theatre festival toronto theatre scene women's theatre