“Last year my dream of becoming a recording artist came true after auditioning on Britain's Got Talent. Since then, I’ve had an absolutely fantastic time. It’s been a real gift to me and now I would like to pass on the gift to someone else.” Susan Boyle 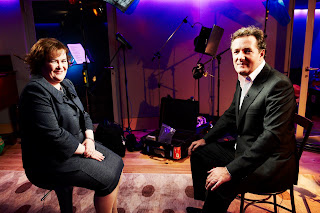 At the end of a phenomenally successful year which saw her debut album smash records and sell over 9 million copies, Susan decided that she wanted to offer someone the opportunity to make their debut in the music industry.

The winner will have the opportunity to duet with Susan on her upcoming second album, The Gift.

Entrants can upload videos of themselves singing “Silent Night” and Susan Boyle will be viewing all entries and then pick a winner.

Susan said; “There are a lot of people out there who wouldn’t have the confidence or perhaps the means to enter a big competition like Britain’s Got Talent. So this might be a lot less daunting for some people as they can record the song in the privacy of their own home. I’m hoping that people who have always wanted to sing will give it a try. I wish you all good luck.”

Image:
Susan Boyle speaking to Britain's Got Talent Judge Piers Morgan about her international search for a singer to duet on her new album The Gift.
Photographer Credit: Syco/Charlie Gray.