on August 21, 2010
from a media release & other materials, including an artist's statement - I saw d.bi young perform as part of SummerWorks Festival recently - she's got a very powerful stage presence, not least because she has lots to say: 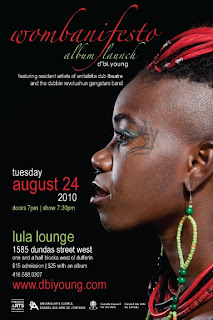 it is a celebration of the fierce, the fearless, and the feminist in all of us.
the lp boasts a rebellious collection of sixteen
cross-genre dubtryp tracks, soaked in d’bi.young’s gritty
awe-inspiring delivery; featuring musicians from havana, montreal, and
toronto as well as the genius works of cuban producer pablo herrera
and armenian- egyptian producer haig vartzbedian.

d'bi.young is a second generation dubpoet who learnt the artform from her her mother anita stewart and her mentor ahdri zhina mandiela, building on the foundational work of stewart and mandiela by developing dubpoetry/dubtheatre theory and practice through anitafrika! dub theatre: a launching pad of artistic training that locates itself within art for social change.

from an artist's statement:

I am an afrikan-jamaican-canadian storyteller – dubpoet, monodramatist, and an educator – who believes in art for social transformation. I was taught storytelling by my mother, who was taught storytelling by her mother. I create art that allows me (and the people who witness and participate in my work) to locate ourselves in complex conversations around identity, belonging, community, herstory, family, displacement and other ways in which we intersect and overlap. I create art about self-reflection and analysis within the context of social change, highlighting our collectivisms and individualities as a part of one humanity. it is important to work among people of our global community and experience our prisms of identity as we create stories about ourselves that reflect each other. 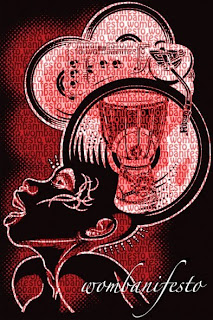 my developing methodology comes out of dubpoetry passed down to me by my mother. orality, rhythm, political content, language are fundamental pillars of dubpoetry. i named the other three principles (urgency, sacredness, and integrity) from observing processes of storytelling everywhere i have been, and noticing the common threads of responsibilities and accountabilities expected. dubpoetry is primarily an oral-storytelling form, originally spoken in jamaica nation language, using (reggae) rhythm and rhyme to chant social commentary.

in the short term i envision sharing my ideas on a global scale. a long term goal of mine is to create, support and participate in the already existing international networks of storytellers for global social development;. ultimately both these long term and short term goals are to contribute to the betterment of all life on our planet.
canadian jamaican writer d.bi young dub poetry lula lounge reggae toronto cd release