Continues to August 15 at the Lower Ossington Theatre

You could say that Foreign Exchange was an audience friendly show. The affable cast members will greet you as you come in the door, (even latecomers,) with an offer of coffee and fresh baked pie - and you can go for refills anytime you like.

As the show begins, a panel of sorts (for lack of a better word) sits at couches on the stage, à la talk show, and the fun begins. Each of them comes from a minority group, with the South Asian, queer, Jewish, black and First Nations communities being represented. Audience members are given a pen and slip of paper to write on. Ask any question about race or culture that you've ever wanted to ask, it instructs. We're told to explore our ignorance, and cool all our hot buttons. The idea is talk about what never gets talked about, and moments of discomfort may arise. 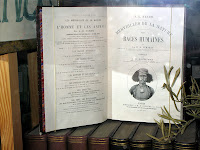 It's such a terrific premise, and one I think we need to practice a lot more in Canada, where our polite facades too often prevent us from discussing anything to do with race. What followed was the panelists reactions to questions they didn't prepare for beforehand and came in the form of video and audio clips, along with those written slips of paper and direct audience participation (more about that in a moment). You could also text a question to a number that was given out.

There were certainly moments when many in the audience confessed to feeling uncomfortable. Questions like Why do you think you're the chosen people? elicited a groam from Michael, the resident Jew. The notion of one person representing an entire race was another of the questions discussed. I actually responded to that discussion, mentioning that when I'm hanging out with African friends, I do feel a certain self imposed pressure to represent myself as better than the "white" stereotype of being boorish, intolerant and wilfully ignorant of cultures other than my own. (That's a literate paraphrasing of what I said, at least.)

I found it a really fruitful experience overall, with real issues under discussion, and a refreshing atmosphere. And, as an added bonus, your ticket stub will get you into another show if you want to continue the discussion (or just have more pie).

Images from top to bottom:

The map shows a "roughly drawn" distribution based on: "On the Geographical Distribution of the Chief Modifications of Mankind, Journal of the Ethnological Society of London (1870) [http://aleph0.clarku)"

World map of human migrations, with the North Pole at centre. Africa, beiing the start of the migration, is at the top left and South America at the far right. Migration patterns are based on studies of mitochondrial (matrilinear) DNA. Numbers represent thousand years.
discussion of race interactive theatre summerworks festival 2010 toronto theater scene