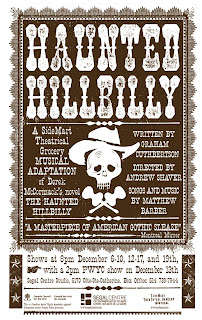 Take a feckless but talented young singer/songwriter with ambitions and a sleek older man with a gift for couture and an appetite for blood and buttocks, add some country tunes, a wife, a girlfriend, a preacher and a henchman or two, and you have what was described to us as the "cautionary tale" of one Hyram Woodside.

On his way to buy a new shirt one day, he stumbles across the haberdashery of Nudie, a man with a talent for making clothes. He talks Hyram into wearing his flashy garb on stage, instead of the homespun attire made by wife Audrey. The kicker is, Hyram's built a reputation for writing songs about being lonely, and since getting married, he hasn't been able to write. So Nudie talks him into a sequinned jacket, then an embroidered suit or two or several, and eventually out of his marriage. Lonely again, he writes the songs that get make him famous...

It's a classic Faustian-esque theme. The writing is fresh and funny and kept me guessing, even as it used a flurry of familiar icons - the seductive vampire, the loving wife, macabre wax museums and carnivals - the brisk pace held it all together. The talented cast handled the musical numbers with aplomb and an appropriately gleeful abandon, aided by three musicians who played onstage the entire show. As for the blood and buttocks, I'll just mention that the vampire gets his fill from Hyram via jeans with special flaps at the back.

Not surprisingly in a piece about the corrupting influence of couture, the costumes are fab, especially Hyram's stage gear. There was a lot of buzz about this show, and deservedly so, with a sold out house and a line up around the block for Sunday's matinee.