on August 06, 2010
LIFE IS HORRIBLE.
DEAL WITH IT.
A revue of sketch-comedy and nihilism

When these people say nihilism, they mean nihilism! I caught the opening night of Life is Horrible last night, and I can attest to the fact that this sketch comedy revue not only contains several very funny "Adventures 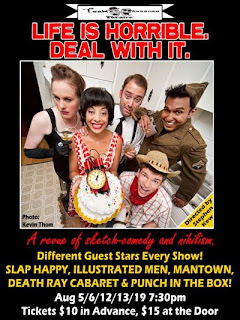 with a Nihilist" segments, but an overall tone of abnegation, anarchy, denial, disbelief and disorder (thanks www.thesaurus.com!) And it really is funny, did I mention that already?

Where do I start? The show is a rapid moving barrage of skits and sketches, some lasting mere seconds, others several minutes, that cover the gamut of life's horribleness and absurdities, from the vagaries of television programming to gas leak repairs, unwanted vampire/werewolf pregnancies, the death penalty, gangsters and of course much more. Their approach varies from straight up farce to humour for the over educated, like the nihilist segments. Cinderella's fairy godmother gives her a minor in women's studies and a major in drama - "Try getting a job with that!" she exclaims, and of course mayhem ensues.

My favourite was the one where a guy goes into a car body shop to complain that his car hasn't really been fixed, only to find a "quantum mechanic", who explains that his car still contains enough car-ness to be a car, and is in perfect "atomic condition". "By trying to start your car," she insists, "you made it not start!"

If your sensibilities are particularly delicate, be forewarned that the show's humour is not. It covers everything from abortion to the return home of a wounded soldier, and language that contains the infamous "C" word. The packed crowd at Kensington Market's Bread and Circus Theatre loved it, and deservedly so.

As a bonus, you'll not only see the show, but different improv guest artists that open each performance. Last night, we were treated to Slap Happy, a trio that started a riff on haircuts that included Sergio the existential hairdresser and sexually suggestive mailboxes. You really had to be there.
bread and circus theatre improv comedy kensington market sketch comedy toronto theatre scene