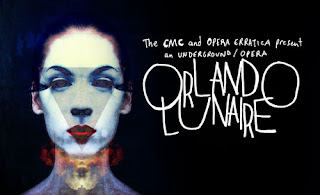 poems from Albert Giraud’s Pierrot lunaire he composed in 1912.  The industrial shed was transformed (somewhat) with black fabric on either side and rows of fold out chairs, the stage bisected by a kind of translucent screen. The musicians played behind the screen, and the singers passed in front and behind it at various times, and the words were translated from the original Italian and German in English that flitted across the screen, sometimes unintelligibly at agitated moments. 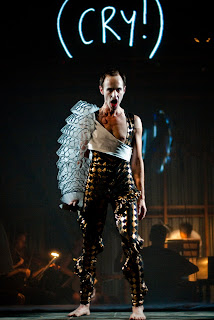 At first thought, Handel's rich baroque score and Schoenberg's ethereal atonalities  seem an irreconcilable pairing, but somehow it works - perhaps because I wasn't overly familiar with either score, and without expectations. A dozen or so musicians were divided between period instruments and modern, flitting back and forth seamlessly, as did the two singers in a mad kind of narrative that ran the gamut of operatic emotivity from the euphoria of love, rage, despair and thievery to murderous thoughts. The opera came in short sections with titles like Madonna, Thief, Hell, and so on, and switched back and forth between the 18th and 20th century scores.

I interviewed a theatrical director earlier this year, (Catalyst Theatre's Jonathan Christenson, actually,) who described his goal as wanting to transport the audience into a different realm. I suspect that Opera Erratica leader Patrick Eakin Young shares that same thought, and on that point the production succeeds admirably. It took us into a kind of insane journey into the character of Pierrot (played by both singers - I think!) the melancholy clown whose great love Columbine perpetually leaves him for Harlequin. Imaginative costuming by Heidi Ackerman certainly helped in that regard. 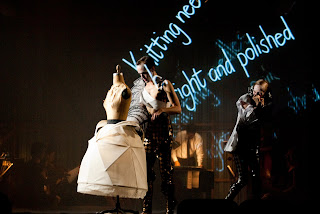 It was interesting and performed with conviction, particularly by soprano Carla Huhtanen, who went seemingly without effort from the soaring notes of Handel to Schoenberg's half spoken poetry. The venue was full at about 125 people on Sunday, and as a special note of interest, South African visual artist William Kentridge was in the audience - turns out he's a relative of Patrick Eakin Young.