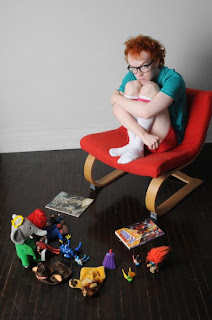 Redheaded Stepchild lets us into the world of one 12 year old redheaded "sweet disaster", as his suave, older alter ego Rufus Vermilion describes him. The play begins with Rufus on stage, complete with a Hefner-esque satin dressing gown and in full lizard lounge stage patter, complementing we the audience on our collective beauty and such. Rufus, as a point of fact, singled me out and came down into the seats to check out my hair and yank at a lock - which is what I get, I guess, for sitting in the second row in the aisle seat.

But I digress. I'm an atypical child, says Nicholas when he first appears, and never truer words were spoke. The set is quite spare, just the bare stage as his room and an old blue trunk out of which Nicholas pulls various toys. With the lid raised, it (surprisingly) serves well as a screen for minor costume changes.(photo by Greg Wong)

And see, Nicholas isn't just the redheaded stepchild of urban parlance, he likes show tunes, and connects with Rita Hayworth when his search for a male role model can only turn up David Caruso at best. He just doesn't fit in, in other words, and the school bullies make him pay for that in increasingly violent ways - including a Facebook page inviting people to his beating. Add Maryanne, the stepmother and third character, a jockish woman who never saw herself as a mother. She's not evil, but she's definitely not in tune with the needs of a troubled and precocious preteen. 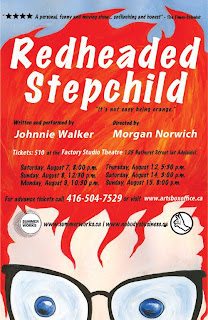 The writing is clever and full of wry wit. In speaking of his parents and the cause of his current malaise, he notes, It's not that they got divorced - everybody's parents get divorced." For the most part, the flow of the words has a natural ring to it, barring occasional moments of too broadly drawn comedy, (like the over used reference to Caruso and sunglasses). Johnnie Walker switches between the three voices and points of view without missing a beat, and he's especially authentic as Nicholas in his 12 year old mindset.

Like Nicholas, my mother was a huge Rita Hayworth fan, so I grew up in a household where redheadedness was revered. I'd heard of the ginger phenom, but the tales of outright persecution surprised me. The yank didn't hurt, by the way, I have a fairly high threshold of pain - unlike redheads, who are genetically predisposed to have a low one, yet another useful fact I learned from this engaging production.
canadian theatre nobody's business theatre summerworks festival toronto arts event toronto theatre scene