A Jamaican flag, draped at the front of a table, offers the only splashes of colour against the matte black

environs of Theatre Passe Muraille and the 3 black clad performers in this piece. Likewise the production itself takes a minimalist approach, centering around the performance of d'bi.young as she dubs and sings and rants and cajoles us through a story about art student activists and their clash with police, and poses the question - what happened to the revolution in Jamaica?

The play comes as quick segments, some in pure dub, some as dramatic monologues, with d'bi switching seamlessly between an array of characters. Among the first scenes is the questioning of one of the students by police, the subsequent scenes swirling around the incident in a circle that widens to include fellow activists, speechin' politicians and the brutal cop himself, looping back and forth to connect the events and characters.

Gradually, the players emerge and their words begin to coalesce, winding themselves into a tighter and tighter circle around the "Freedom Rally" they'd planned to hold opposite that of the politicians, all set against the real life backdrop of the ultra-violent elections of 1980 that saw 745 people killed, including one member of Parliament. The story takes on greater urgency as it unfolds, despite occasional flashes of humour, propelling the piece to its climactic conclusion. I don't like to give away the details - part of its appeal lies in putting the pieces together as you see it.

d'bi is joined on stage by Iam on digiridoo and Stxman on sticks, who ably supply rhythm, percussion, music, sound effects and a couple of extra characters in a scene or two. The third in a trilogy of pieces by this 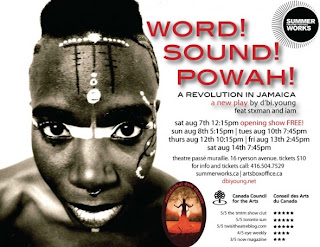 talented performer, (begun with the Dora Award winning blood.claat: one womban story in 2006,) the piece looks at how Jamaica exchanged the tyranny and inequalities of the colonial era for a set of new tyrannies and inequalities at the hands of its own ruling class. As one of the characters remarks it's "the king replaced by a jester".