It didn't seem like it had to be the end of summer at the Gladstone on Friday, ending a week of record high temperatures with the laidback charms of the House of David Gang and its faithful interpretations of roots reggae.

The group has quite a history, as it was told to me, going back to its formation about fifteen years with original members like lead vocablist King Selah and drummer Jahlin Edwards. The House of David was a name given to a place on Queen Street West house those original members shared and used to the host after-hour reggae parties from about1988 -1995. Many of the musicians who passed through were session and reggae players who were playing at the legendary (and now defunct) Bamboo Club just down the street. Over several years many musicians have added their talents to The House of David. 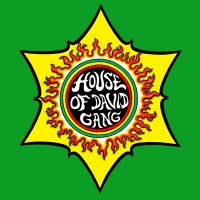 The room was very dark, my camera is cheap - let's say "unsophisticated" - but I think you still get the idea.