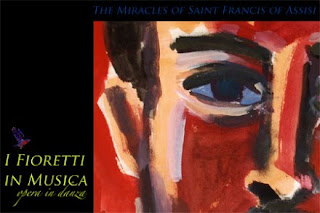 outlines of what you can expect at the upcoming production of I Fioretti in Musica - Opera in Danza. It's presented by Pioneers go East Company, or La Compagnia Teatrale I Pionieri dell'Est. Founded in 2005, they're dedicated to producing Italian theatre and opera in America, and operate in residence at La Mama ETC.

Musically, I'd describe the piece as showing its 14th century inspiration in textured, contrapuntal works with soaring, ethereal melodies and harmonies, juxtaposed against an electronica score that uses live voice processing and music inspired by the noises of New York's streets. It's staged as a Medieval era madrigal comedy, with five singers on one side of the stage, and 12 dancer-puppeteers who act out the story on the other side of the stage. Running 75 minutes, the production includes live electronic music, with a mezzo-soprano as St. Francis, a countertenor, a tenor and two baritones.

You can check out audio samples from their latest rehearsals here at composer Sasha Zamler-Carhart's website.

. It looks to bring the teachings of the good Saint - who renounced the materialism and an easy life as the young, rich son of a merchant to serve humanity and nature in poverty - to a contemporary context. Saint Francis saw the natural world as a manifestation of God, and treated all living things as his brothers and sisters. It's a lovely and powerful message for today's world, to be sure.

The team behind the production comes with some impressive credentials, including: 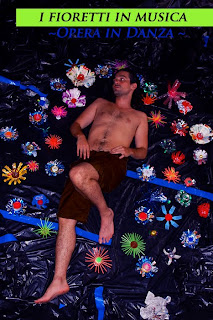 Told in four acts as independent vignettes, St. Francis is cast as a homeless person in New York in a gritty urban staging that includes trash bags and shopping carts, and bird puppets made of recycled garbage. The scenes cover Francis's conversion to a life of poverty, St. Francis preaching to the birds, the Saint saving the wolf of Gubbio from being killed by townsfolk, and in the final act, sees an older St. Francis dishing up hospitality to three thieves.

It sounds like a pretty interesting take on a story that's worth retelling.