Kroetz' Through the Leaves Opens in Toronto

on September 12, 2010
From a (very brief!) media release - just opened, looks interesting and stars one of my favourite actors of all time, Nicholas Campbell (I think the pic alone says it all!) 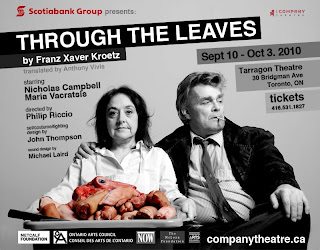 With Through the Leaves celebrated German playwright Franz Xaver Kroetz has written an uncompromis- ing relationship drama that chronicles the failed relationship between Martha, a female butcher and her abusive companion, Otto, a loud-mouthed factory worker. The play explores how the two just can't connect in a way that's real or true, how intimacy is ultimately impossible in an extremely unique relationship that yet depicts a very universal truth about the desperate need in humans to feel connected to someone else.