In New York City, there's downtown jazz, and there's uptown jazz. Downtown, you can pay a hefty cover charge to hear the "big names", with a 2 drink minimum, only to be hustled out the door unceremoniously after a 2 hour set so they can cram the next crowd in. 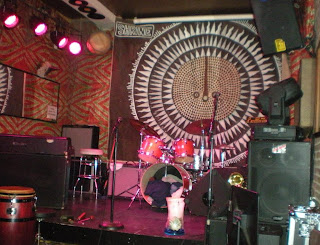 Uptown, jazz lives on the street and in practitioners like Lu Reid, who's got syncopation coming out of his pores, and The Shrine is one of Harlem's many gems devoted to the art form, with the music playing seven nights a week. There's world music on the menu too, and plenty of time to sit back and enjoy it. With its laidback vibe and a funky décor that combines exposed brick and a multitude of classic album covers that line the columns and walls, (the kind of decorating scheme that was no doubt accumulated over time,) it's the perfect place to get in a music fix.

Lu presides over the Sunday afternoon jam, playing the standards with an impeccable core band of bass, drums, keyboards, guitar and himself on the trumpet, along with a floating cast of visiting soloists, including singers and various instrumentalists. The musicians are multi-generational and multi-ethnic, some no doubt culled from the hordes of talented students in this town to guys like singer Fred Nelson, who's obviously been at the game for decades. 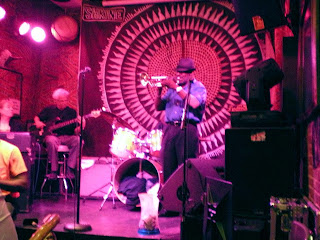 The music has the genuinely impromptu nature of a jam session. With these kind of chops, the intonation issues are quickly sorted out, (even with 3 horn players and a sax, as was on stage at one point,) even if the endings of songs are a bit raggedy on occasion. The tunes go from swingy to slow and sexy, and Lu's solos are one of the highlights of the experience.

I was treated to a line up that included Steven Sink on bass, Lucy Gallagher on keyboard, Sam Greschen on drums, and (among others) notable soloists Tovah Langhof on the sax, along with Kenny Lee and Randall Murray joining Lu on trumpet.

Check them out here - that's Lu in the white shirt with a different line up than the one I saw, but the same kind of loose vibe and tight playing. It turns out Lu is as charming as he is talented, so don't be afraid to say hello on the breaks.
harlem jazz jam session live music nyc lu reid the shrine nyc traditional jazz