I have a bit of a confession to make. I have this thing with puppets - particularly marionettes. They creep me out. Even as a child, although I did play with them, (it's what one does as a little girl,) it was always with an 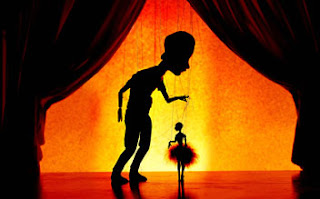 edge of distaste and unease. So first off, I'll credit Ronnie Burkett with creating enough theatrical magic that I actually forgot about my longstanding aversion. In fact, I found myself reacting to a hand puppet as if it was actually a character separate from the hand inside it, so well was he able to embody the illusion.

Billy Twinkle begins with a crisis that unfolds quickly. Billy's performing his show - Stars in Miniature - on a cruise ship where, weary of inattentive patrons, he has a bit of a meltdown that results in his getting fired. More than a simple job loss, it sparks a midlife crise where he's lost faith in his gift, his own artistic vision. "Life will never be as beautiful as I imagined it," he laments.

From there, the story takes a detour into left field, as his hand puppet becomes possessed by the spirit of a former mentor who forces him to re-enact scenes from his life and his show, and their troubled relationship. It 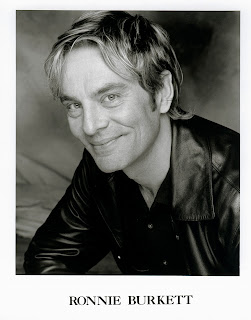 sounds like a convenient excuse for a lot of puppeteering, and in lesser hands, could have become a bit of a side show and novelty act. Burkett's gift, however, is to infuse it all with a level of truth that made that damn hand puppet and all the marionettes into real characters.

His skill with marionettes is remarkable, giving them a subtlety of expression that saw a dejected shrug, hand gestures and much more. Even the marionettes had marionettes! I really did forget there was anyone pulling the strings at times, and those characters included oddities like a stripper (okay, "showgirl", lol,) tipsy society lady and demented old man, along with Billy at various points in his life and the men in his life along the way.

Ronnie's script is witty and insightful. "If it's not the asshole of show business, it's the belly button," he says of the cruise ship gig. Later, when he argues with his partner over money he's saving for plastic surgery, he tells him, "I am not vain - I'm in show business! I have a level of vanity appropriate to my job." His performance takes Billy from sweet if oddly marionette-obsessed preteen to disillusioned middle age in a performance that runs the gamut from philosophical to histrionic. It's a real showcase of his work.

He's aided by a wonderful set design (again his own) that creates the bow of a ship complete with railings, the puppet stage and twinkly stars and moon above. It was the perfect backdrop to the story.

In the end, Billy manages to rediscover the spark and his love of show biz, and he lays an old ghost to rest in the process. You probably still never find a marionette at my place, but for a couple of hours, the magic was real even for me.