Sampling Small World on the Street 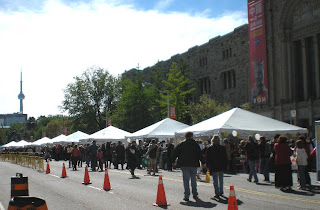 With only a couple of hours to spare, I walked right by the hefty lines at Word on the Street on Avenue Road and straight into Queen's Park to see what I could catch on the stage.

I'll mostly let the video clips fill you in on the performances - tight playing, cool vibes - this city certainly plays home to a lot of great musicians - but the two bands I saw have interesting stories to tell too.

Njacko Backo is a native of Cameroon. Along with traditional Cameroonian drumming, he studied music under various masters all over West Africa. "You can hear Senegal, you can hear Guinea - you can hear Canada - in the music," he told Garvia Bailey of CBC Radio One's Big City, Small World Show in a bit of a Q&A after the show. I think you can hear a little soukous in there too.

"White people came from the sky - on planes," he joked, "I wanted to see where they came from." His music is always uplifting in its message, and he draws on a spiritual and all inclusive philosophy. He sings in English, French and Bazoué - one of Cameroon’s many languages - and he'll also be part of the Global Soul show at the Isabel Bader Theatre on October 3 as part of the Small World Fest.

beatmap features Alan Davis on drums - one of the founders of Small World Music, as it happens - and they represent nearly 100 years of experience between all its members. They also include Latin-flavoured composer and arranger Neil Gardiner on keyboards, accordion and trombone, and Charlie Roby, a multi-guitar player and songwriter. Bassist Reza Moghaddas was one of Tehran's premier players and audio engineers before he moved to Toronto. They recently added Ethiopian style singer Maylat Mesfin, whose soaring voice adds a gorgeous dimension to songs that draw from the world's library of musical styles.