A Season of Africa at the Royal Ontario Museum

on September 25, 2010
Anchored by the world premiere retrospective exhibit of the work of Ghanaian born and world renowned artist El Anatsui, the Royal Ontario Museum has some really great things planned for this fall.

By the way, you can check out the El Anatsui show free during Nuit Blanche - October 2, it's opening day. From a media release:

A Season of Africa at the ROM The Royal Ontario Museum (ROM) celebrates a Season of Africa this fall, with a thought-provoking series of exhibitions and events inspired by African art and culture. Featured are two new exhibitions, El Anatsui: When I Last Wrote to You about Africa and Position as Desired/Exploring African Canadian Identity: Photographs from the Wedge Collection, both opening October 2, 2010. Later this fall, significant new African acquisitions to the ROM’s permanent collection will be unveiled. A full slate of related public events delves into the complex cultural, social and political issues of modern Africa. Themes ranging from contemporary arts to geo-political realities of the region will be explored through guest lectures, panel discussions and films.

El Anatsui: When I Last Wrote to You about Africa
The Institute for Contemporary Culture (ICC) at the ROM presents the world premiere career retrospective of Ghanaian visual artist El Anatsui. This exhibition is the artist’s first solo show in Canada and features 63 works in various media drawn from public and private collections internationally. Drawing on Ghanaian and Nigerian cultural references as well as global, local and personal histories, El Anatsui’s 40-year body of work comprises large shimmering metallic wall sculptures, for which he is best known, as well as paintings and sculptures in wood, ceramic and metal. 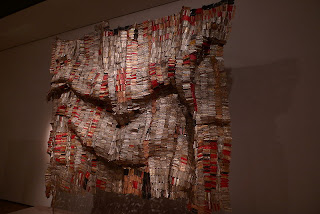 This retrospective has been organized by the Museum for African Art (MfAA), in New York, and will be one of the inaugural exhibitions in the MfAA’s new building, which opens in 2011. El Anatsui: When I Last Wrote to You about Africa will be on display in the Roloff Beny Gallery on Level 4 of the ROM’s Michael Lee-Chin Crystal from October 2, 2010 to January 2, 2011.

Walls and Barriers
In association with the El Anatsui exhibition, the ICC is pleased to present Walls and Barriers: A Collaborative Project, an innovative education project by diverse youth from secondary schools and community agencies across the Greater Toronto Area. Unprecedented in its scale and conception, it involved more than 500 young artists and teachers who created a public art installation inspired by and in response to the work of El Anatsui. Walls and Barriers will be on display in Canada Court at the ROM from September 25 until October 23, 2010.


Position as Desired
The ROM, in association with Toronto’s Wedge Gallery, announces Position as Desired/Exploring African Canadian Identity: Photographs from the Wedge Collection, a selection of historical and contemporary photographic works documenting the experiences of African Canadians. The exhibition will be on display from Saturday, October 2, 2010 to Sunday, March 27, 2011 in the Wilson Canadian Heritage Exhibition Room of the ROM’s Sigmund Samuel Gallery of Canada.

New African Acquisitions
Contemporary African artist El Anatsui was commissioned by the ROM to create an original metallic wall hanging for the Museum’s permanent collection, which will be unveiled in the Shreyas and Mina Ajmera Gallery of Africa, the Americas and Asia-Pacific (Level 3, Michael Lee-Chin Crystal) around the time of the opening of the exhibition El Anatsui: When I Last Wrote to You about Africa. In addition, several important and never-before-seen objects recently acquired for the African collection will be installed in this gallery in November and December. More information will be released soon.

*Please note that program details are subject to change.