All of the exhibitions mentioned continue to October 24, 2010 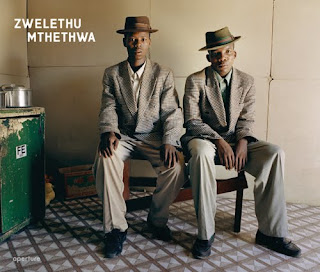 collections. "Interiors" and "Empty Beds" take us into the domestic lives of migrant workers in and around Johannesburg, South Africa. "Common Ground" presents views of houses in post-Katrina New Orleans alongside those of Cape Town, SA, after a series of wildfires ravaged the area.

Zwelethu's work is collaborative rather than that of the dispassionate observer. I think you can see his early training as a painter in the lively use of colours in his photographs, and in their intimacy with their subjects that goes beyond documentary towards a sympathetic portrait. The walls may be cobbled together from unfinished sheets of board or plywood, or unevenly painted concrete, in some of them papered over with magazine pages, posters and labels, but the rooms' inhabitants sit with a quiet dignity and individuality, their clothes and decorations carefully chosen. In Common Ground, he finds the beauty in mud spattered walls and the abstracted patterns of paint and water damage.

Mind you, I've seen apartments like that in the Bronx.

I really enjoyed his work. It's warm hearted, and talks about experience on a human scale. Each images was quite engaging. 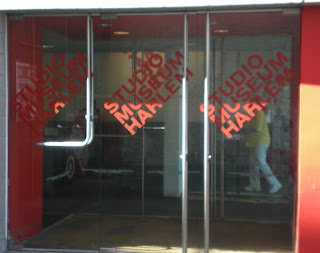 As the title of the show suggests, the work of the three artists in residence each involves some element of reusing the past. Mequitta Ahuja's work involved large paintings. Their kinetic compositions were most often dominated by the figures of black women in a colour range of dark shades depicted in sinuous lines. Some uses three dimensional elements like enamel and glitter, adding to the mythological dimensions of her work.

Valerie Piraino's installations include family photographs, letters and files given imaginative treatments. In one piece, a series of empty frames were hung on the wall. A slide projector cast a images up, one over the whole wall, another that would fit neatly into one of the frames.

Lauren Kelley's work consists of elaborate dioramas with photographs and scupture, and stop motion animated films. The films range from the amusing adventures of a black stewardess and her Farrah-esque supervisor (done in Barbie-type dolls) with procedural clashes and running makeup, to a dreamy sort of meditation with a French voiceover that doesn't match the English subtitles, where animals in a park-like setting are gradually immersed in goo. In the last, a little girl's voice narrates a story about a pool party as she sinks, unnoticed, to the bottom of the pool.

This show put together work by New York city high school students, each alongside a piece by noted Harlem photographer James Vanderzee. The Vanderzee piece would match the student's in some way, mainly thematically.