on September 14, 2010
A talk with Paul Laverty, screenwriter of Even the Rain (Tambien la lluvia).

Directed by Icíar Bollaín, (pictured) Even the Rain, or Tambien la lluvia in its native Spanish, was a project some ten years in the making, including a virtual rewrite of the script along with several revisions and edits along the way. For noted screenwriter Paul Laverty, it's obvious the story was more than just another film. "I've been trying to remember... how long it was," he laughs (albeit a little ruefully). "It's a labour of love, and a long obsession."

To really understand his level not only of dedication not only to the script but, as in all his scripts, to an examination of the historic realities it represents, you'd have to jump back a bit in Paul's career. Born in Calcutta to parents of Irish and Scottish descent, he first studied Philosophy, then got a degree in law in Glasgow. It's that work that took him first to Latin America, to Nicaragua specifically during the 1980s - the time of the Sandanistas and Reagan-era U.S. involvement in the "Contra" movement that battled their government. (Remember that old Iran-Contra-Gate thing?)

"I'd been working in Central America for three years. I did some journalism, wrote for newspapers and things - that was before the Internet." He describes watching as the U.S. brought its weight down on the tiny nation under the Sandanistas. "They're a superpower, and this was a country of maybe 3 million people at the time." 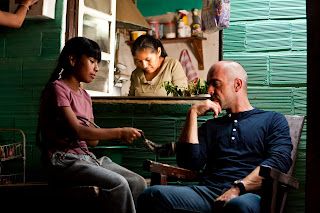 It not only ignited a sense of having to take action, it ignited his sense of storytelling. "I was infuriated in a way by what I'd seen in Central America," he says. "I suppose I had a real sense I just wanted to tell a story."

Film making seemed the ideal way to bring a story to the most possible people, and fate led him to cross paths with legendary British director Ken Loach, whose own approach seems the perfect fit. "He's not scared to deal with political issues," Paul says, but then adds, "although every film is political. I dislike that false differentiation between 'political' and 'non-political' films. Mainstream film does have a political message - one about the supremacy of young white men and how they can solve all their problems via violence... or their charms," he laughs. "When we talk about these communities (though), it's (dubbed) 'political'." 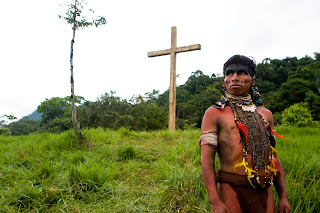 And so a creative collaboration was born that has to now produced 11 films, up to this year's Route Irish. NB - if you're a Ken Loach fan, director Icíar Bollaín played in his epic Land and Freedom, about the Spanish revolution and the rise of the Fascists - and Paul Laverty had a bit part in it as well.

The story of Even the Rain was especially challenging. "It's a very complex story," he acknowledges. "We're dealing with three stories, actually, in two time periods." First is that of an idealistic young Spanish director Sebastián (played by Gael García Bernal) who wants to make a period film that exposes Christopher Columbus for the gold-mad imperialist responsible for the exploitation and destruction of indidgenous cultures that he was. His producer Costa (Luis Tosar), looking to save a buck or two, decides to film in Bolivia. They arrive there in 2000, at the height of the Cochabamba water crisis - a real life event. The government, at the insistence of the World Bank, tried to privatize the water supply, leading to a general uprising and civic mayhem known as the Bolivian Water Wars of 2000. 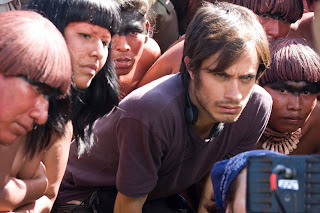 Against the historic and current events, the film revolves around the personal stories of the director and producer and how each reacts and evolves as the current realities increasingly infringe on their project. The idealist puts the film above the real people and circumstances around him - the colonialism of old has been replaced by the dominance of today's global corporations - the themes and events all resonate on several levels at once.

"I started the historical version first." When finished that first version, though, something seemed lacking. "Sometimes, it can feel very distant," he says of the historical approach. "The language is very different. Doing it in the 21st century brings it much more into the immediate. Some key scenes were kept - the arrival of Columbus for one."

"I've always been fascinated by how we write the story of our own history," he says, noting that Columbus is still largely revered as an icon of Western culture. "I wanted to show the massive cruelty," he says. Balancing that is the will of the indigenous people. "Resistance is like the DNA of the rock, it runs right through both stories," he says.

The production (the real one, that is,) involved making deals with the local indigenous population, who agreed to appear in the film, along with many other local people. So, other than the leads, many of the actors you'll see in the film are non professionals. "It's a very different aesthetic," Paul says. "You actually see the indigenous resistance." He's enthusiastic about the level of talent, both in the leads and the character roles. "The actors were terrific."

Paul not only draws from experience, but thoroughly researches his scripts, and mentions that the book A People's History of the United States, by Howard Zinn, influenced him greatly during the writing of this script. Catch the film if you can.