When your favourite beer invites you to a TIFF party out of the blue, it seems not only churlish but ridiculous to refuse. At least it did to me, albeit after a moment of wondering "how did they know??" Turns out, my favourite beer is in the habit of sponsoring film festivals and events, which is yet another reason to keep them as my fave.

The Drake was all decked out in Stella Artois, as was the horde of

lovely supermodel-types ushering we guests inside the hotel and up the stairs to the chic patio. And so I found myself ensconced in a white leatherette banquette, and while the drink tickets were only two in number, (which seemed like plenty actually,) the cuff links were in unlimited supply, and the tasty hors d'oeuvres came in droves towards the latter half of the event, (although we had to suffer through with only a single beet and goat cheese thingie till then). 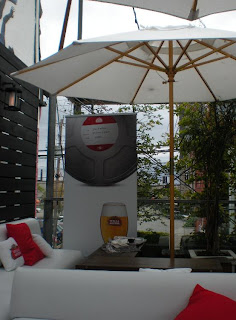 Along with the consumables, iconic movie The Maltese Falcon played over in one corner, and we were treated to some TIFF talk with the directors of two films, Ed Gass-Donnelly (Small Town Murder Songs) and Jonathan Sobol (Beginner's Guide to Endings) with one of the executive producers of the latter film, Sean Buckley. And it's funny, but you down a few Stellas and the stories do come out.

Ed mentioned how stoked he was at being screened in the Contemporary World Programme. "Just like playing with the big guys," he joked. Likewise, Jonathan was looking forward to a gala screening of A Beginner's Guide to Endings at Roy Thomson Hall. He called working with screen legend Harvey Keitel "hugely terrifying", but also described it as the highlight of his career so far. The movie features Keitel as a gambler whose sons are left dealing with his "somewhat complicated legacy" (as they call it in the official description). It also stars Scott Caan, Paolo Costanzo, Wendy Crewson, Tricia Helfer, Jason Jones, and J.K. Simmons. 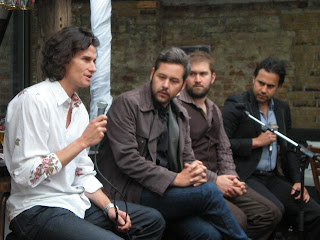 When asked by event MC (and Culture Producer) Marcello Cabezas about staying in Canada, Jonathan was blunt. "I'll go where I can make films," he said. He noted however, interestingly enough, that Canada was one of the few countries left in the world with a decent level of independent film production, along with places like Australia and Belgium. I guess the idea is that in much more commercially oriented markets, like the U.S., where there is some expectation of making money, the funding for edgy indie flicks has dried up along with the economy, whereas here in Canada, with our perennially underfunded film industry, it's just business as usual. (In the picture from the left, Sean Buckley, Jonathan Sobol, Ed Gass-Donnelly & Marcello Cabezas)

Some interesting insight into the volatile chemistry that is filmmaking from Ed Gass-Donnelly, who talks about working with lead Peter Stormare in this short clip. He's in the centre, with Jonathan Sobol on the left, and event MC Marcello Cabezas on the right. (The film also stars Jill Hennessy, Aaron Poole and Martha Plimpton.)