Canadian filmmaker Ingrid Veninger stars daughter Hallie Switzer in this low key coming of age/teen romance story set in Slovakia - not that Hallie wouldn't have known what to expect. Her brother Jacob starred in Ingrid's acclaimed film Only (2008) which also dealt with the world of young love.

“ONLY, which I made with my son Jacob, was a remarkable experience both as parent and director,” Veninger says. “He was about to turn 13, and the film explored first love and that time just before we become adolescents. When Hallie, my daughter, turned 17, I knew it would be important for us to create something together, before she finished high school and was off into the world – and that’s how MODRA was born.” 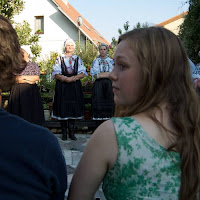 The set up is this: Hallie's Lina is about to embark on a week long trip to Modra, a town in Slovakia and home to a multitude of relatives she hasn't seen in years. Dumped by her boyfriend on the eve of departure, she impulsively asks Leco when he calls to ask her for a date.

If this were a Hollywood film cast with the latest and hottest tween stars, (who were probably actually in their 20's!) the two of them would slowly discover a burgeoning romance, with the possibility of a romantic rival or two to spice up the story line. But this film aims not to be summer blockbuster entertainment, but a more subtle and realistic look at the uniquely confusing predicament that is teenage desire.

The two leads flesh out the characters into realistic portraits of teenagers - more often uncommunicative than the glib versions of popular culture. There is an attraction of sorts between the two. It's one that vacillates between the two winsome leads, and the progress of which is prickly in all its unexpressed and unresolved tensions and tangled motives. 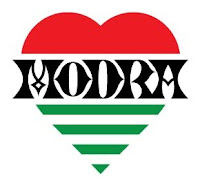 This is also no glamourous trip to the Continent; Modra being a town with not much in the way of urban amenities, but nonetheless a charming rural backdrop to their developing relationship. The film spends almost as much time following Lina as she explores her Slovakian heritage through an endless succession of visits to relatives, the scene of much feasting and musical interludes.

It's a thoughtful portrait of teen life that should appeal to adults just as much as teenaged filmgoers. 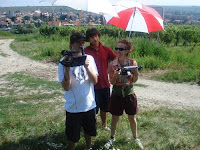 Born in Bratislava, and raised in Canada, Ingrid Veninger is a producer/actor/writer/director with numerous award-winning credits to her name, including NURSE.FIGHTER.BOY, which was recently nominated for 10 Genie Awards.  She has worked extensively in film, television and theatre since 1980, appearing as an actor alongside Holly Hunter, Jackie Burroughs, Stellan Skarsgard, Vincent D'Onofrio, Clark Johnson, Janeane Garofalo and Meryl Streep, among others.
canadian film independent film modra teenage romance film tiff 2010 toronto international film festival