TIFF Preview - A pair of shorts from the NFB

A pair of shorts from the NFB 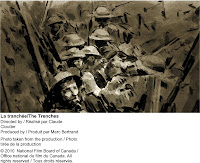 The Trenches (6:52)
by Claude Cloutier

This dreamlike and compelling anti-war short film follows the (mis)fortunes of a soldier during World War I. The visuals consist of archival images that filmmaker Claude Cloutier has brilliantly turned into animation via ink and brushstrokes. He creates a beautifully flowing world that shivers, flickering like candlelight with each frame slightly different than the last. 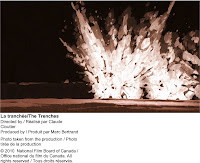 An instrumental soundtrack adds to the atmosphere as we're taken on a journey of poetic proportions. The scenes shifts back and forth from what seems like an idyllic agricultural "before" to the shell shocked present, as if moving between different possible worlds. Which is his ultimate reality?

It's beautifully rendered and quite affecting.

This animated film takes a trip into the imagined diaries of Arthur Lipsett, a renowned Canadian experimental filmmaker who committed suicide at age 49 in 1986. (In real life, his diaries were never found.)

Divided into three parts that roughly cover his childhood, the emerging adult as an artist, and then descent into the chaos of mental illness that brought about his death, the film consists of a flow of images and eloquent ink illustrations characterized by expressive washes and brushstrokes.

"I keep trying to find something good in these memories," the voiceover says. While the film begins with what looks like charming sepia toned images of children playing, even his childhood is tinged with sadness when an unhappy and alcoholic mother abandons him and his father. The images quickly morph into darker visions and

a rock 'n roll soundtrack, with moody domestic scenes of a living room, and the quintessential boys' room with walls plastered in hockey players and other posters.

The second part sees him aging into an adult, with bleak cityscapes and a pastiche of pop culture images depicting the outside world and its influences on a man who always appears alone. The third section, called Free Fall, deals with his increasing inner turmoil through surreal images and snippets of reality - like a handwritten prescription for meds. At the end, a cacophony of images accompany his lonely and haunted eyes.

The film does a nice job of taking is right inside his madness, and the melancholy that accompanies mental illness.
canadian film independent film national film board of canada short film tiff 2010 toronto international film festival