VideoCabaret Remounts The Great War in time for Armistice Day

Lest We Forget
VideoCabaret remounts
THE GREAT WAR
The History of the Village of the Small Huts, 1914-18
Previews from October 26, Opens November 3 for a Limited Run
The Cameron House, 408 Queen Street West, Toronto

Toronto, September 8, 2010  In time for Armistice Day and the season of Remembrance, VideoCabaret remounts Michael Hollingsworth's acclaimed production of The Great War, which saw sold-out houses 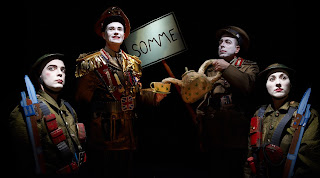 every night of its initial run this past spring.

The Great War focuses on the mid-ranking officers and infantry-men who are named in no history book -- their stories link the front line with the home front, and intensify the tragedy in this play as far as satire can go. In VideoCabaret's magical staging-style, seven actors play more than 40 characters whose stories take the audience from the golf courses of Canada's political elite to munitions factories where widows work, to the front lines of Ypres, the Somme, Vimy Ridge and more. The Great War elicits horror and laughter with the graveyard humour of soldiers, the murderous foolishness of leaders, the absurdity of warfare.

The play follows Canadian officers and infantrymen through the battles of the Ypres Salient, Vimy Ridge, Passchendaele, the Somme and Amiens, as the war devours ten million lives. Through the action on the Western Front, the home front is glimpsed -- Canadian soldiers storm machine-guns as conscription-resisters are shot in the streets of Quebec City. Under British Command, the Canadian forces suffer 230,000 casualties, 58,000 killed.  Canadians' pride and grief kindle a desire for an independent destiny. The piece spans two 50-minute acts. 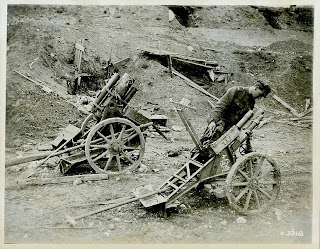 The original '93 production of The Great War was presented at the Theatre Centre on the ground floor of a Legion Hall; the WWII veterans who saw the show embraced it as fully as teachers, students, neo-dadaists, history nerds and theatre lovers.  It won Dora Mavor Moore Awards for OUTSTANDING NEW PLAY and COSTUMES, and five further Nominations including OUTSTANDING PRODUCTION.

In May-June 2010, VideoCabaret created a new production of The Great War that played to sold-out crowds for 46 performances and united critics in praise.

The History of the Village of the Small Huts a.k.a. Canada's History Plays: Michael Hollingsworth has written and directed twenty-one plays dramatising Canada's history from Chief Donnacona and Jacques Cartier to recent times -- stories that capture Canadian society high and low, in various eras, seized by various ideas and passions. In each play seven actors portray dozens of  characters, the legends and losers who made this country what it is.

(The second image, btw, is of Canadian soldiers examining German guns after the operation at Canal du Nord)