Celebrate Animation Day with the NFB

on October 22, 2010
From a media release - you can check out the schedule of screenings and actitvities for Halifax, Montreal, Toronto, Winnipeg, Edmonton, Calgary, and Vancouver at NFB.ca/getanimated and check here for exclusive online programming.

“GET ANIMATED!” WITH FREE ANIMATION SCREENINGS AND ACTIVITIES
FROM THE NATIONAL FILM BOARD OF CANADA

Toronto, October 12, 2010 – The National Film Board of Canada (NFB) is launching the fourth edition

of Get Animated!, a series of free animation screenings and activities from October 26 to November 7, 2010, in cities across Canada. An internationally renowned producer of auteur animation, the NFB created Get Animated! as its contribution to International Animation Day, October 28.

Get Animated! will feature new releases from the NFB’s Oscar-winning animation studios, a Fairy Tales for All program for all ages, master classes by renowned NFB animators as well as additional programming in selected cities. The NFB website will also offer a special Get Animated! playlist at 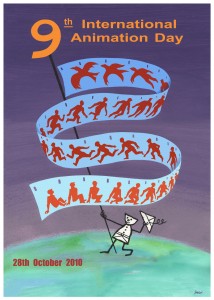