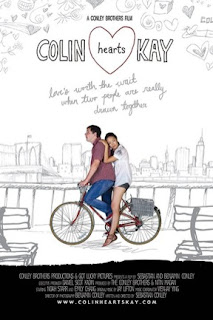 New York, NY (Oct 11, 2010) – Sebastian Conley’s “Colin Hearts Kay” was chosen as the Opening Night film at this year’s New York United Film Festival (October 22-28). This follows a particularly successful run in film festivals across the country, especially in Brooklyn and San Francisco where screenings were added to accommodate demand. The film won the coveted Audience Choice Award for Best Film at the Brooklyn International Film Festival as well as the Prize for Best Editing.

“Colin Hearts Kay”, produced by The Conley Brothers and Got Lucky Pictures, set in Brooklyn, New York, tells a hilarious story through the memories of cartoonist Colin Jensen, as he tries to uncover what went wrong in his three year relationship with Kay Ho. 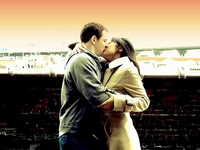 Colin’s pursuit of love suffers a setback when the handsome and rich, Salvatore appears in Kay’s life. Colin and Salvatore’s rivalry culminates in a live-action and animated gladiator fight set in a hand drawn cartoon of the Roman Coliseum. Ultimately, it is up to Colin to erase the mistakes of his past and draw upon the lessons learned to win back Kay’s love.

“People all over have loved this original romantic comedy for how it stands apart from others in the genre. We are thrilled to bring it to San Diego, Philadephia and Brooklyn" said Nitin Madan of Got Lucky Pictures who, along with partner Daniel Scot Kadin produced “Colin Hearts Kay”.

The non-linear story, an ode to Woody Allen’s “Annie Hall,” is illustrated through a comic style combining direct address, fantastical special effects, and animation, created solely by director Sebastian Conley, as Colin draws the audience into the world of his cartoon drawings. Despite an extremely modest budget, the filmmakers managed to pull off extravagant special effects. Animated flying cartoon hearts and transitions unify the action and present an entirely new and captivating visual look.

Relying on the latest technology was essential to Sebastian Conley and his brother, Ben Conley, the Director of Photography. “Colin Hearts Kay” was shot on the transformative Canon 5D Mark II digital still SLR camera. This brand new technology allowed the filmmakers to capture cinematic high definition, with an unprecedented shallow depth of field, giving the film a high quality 35 mm look.

The film has original music provided by twelve Brooklyn-based bands. These brand new songs embody the love, longing, and humor of the film’s characters. The upbeat soundtrack of “Colin Hearts Kay” is sure to capture the imagination of moviegoers and make it a cult favorite. 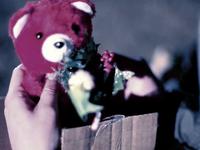 “Colin Hearts Kay” is a new brand of romantic comedy, shot entirely in Brooklyn, which is sure to win the hearts of young audiences everywhere, hungry for a film that speaks to the zeitgeist of a new generation.

You can hook up with them on Facebook here.