on October 26, 2010
With information compiled from a variety of sources: 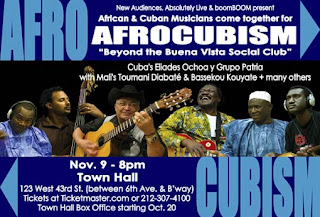 In 1996, as the story goes, American guitarist Ry Cooder went to Havana to record a session that would include musicians from both Mali and Cuba. But as luck would have it, the Malians didn't receive travel visas in time, and so the session went ahead with an all-Cuban line up of musicians whose careers went back decades. The result was the stuff of legend, and came to be known as the Buena Vista Social Club,

credited with sparking a renaissance and renewed interest in Latin music worldwide. 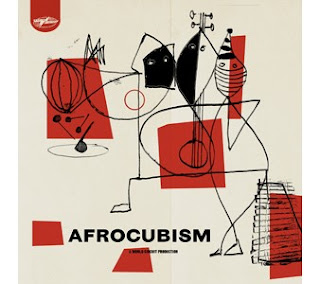 Still, the people at World Circuit Records, who'd arranged the original session, had their hearts set on a Mali-Cuba meeting, and eventually it came about beginning with a few concerts in 2008. When you think about it, the classic styles of both musical traditions involve a reliance on melodic guitar work over layers of polyrhythms, making the collaboration seem a natural one. Add the abundance of musical talent in both countries, and the possibilities are clear.

was released in Europe earlier this month, and comes out in North America on November the 2. You can have a listen here

Too bad for me, they're tied up with European dates (which you can check out on their MySpace page) until late this year, and have no other plans to tour North America till 2011.

They have an incredible line up of musicians: 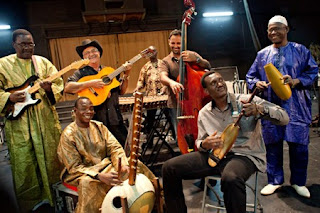 Eliades Ochoa on guitar and vocals
Known for his trademark cowboy hat and black garb, Eliades Ochoa has been dubbed 'Cuba's Johnny Cash'. A proponent of the traditional musical styles of rural Cuba, he was one of the youngest members of the Buena Vista Social Club. Nowadays, he's considered one of its respected elder statesmen.

Toumani Diabaté on kora
He was born into a family of kora masters, and today is widely acknowledged as one of the masters of the 21 string West African instrument. A child prodigy, he made his first recording in London at the age of 21, and has gone on to a career punctuated by fruitful collaborations with musicians across a wide spectrum of musical styles, including Björk and Taj Mahal. 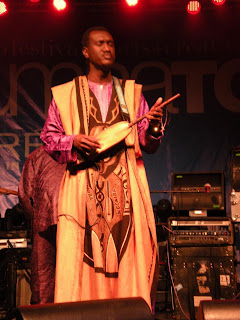 Bassekou Kouyaté on ngoni
I had the good luck to see this master of the ngoni play an outdoor concert with his band - and Bela Fleck - last summer (pictured, at LuminaTO). Born into one of Mali's many musical families, he's revolutionized the way the medieval era instrument is played, including innovations into its actual construction.

Kasse Mady Diabaté on vocals
The veteran West African griot has sung as lead vocalist with the Super Mandé Orchestra and National Badema (Las Maravaillas de Mali) who combined Cuban influences with his traditional Malian style. He also includes solo recordings in a decades long career, and is hugely popular in his native country.

Djelimady Tounkara on guitars
Often called the finest guitarist in Africa, I'd argue he's among the finest in the world, playing with a dazzling virtuosity that combines with a refined sense of rhythm and melody. He found his instrument early in life, and was playing with jazz bands from his late teens. He played with the state sponsored Orchestre National, then moved on to the legendary the Super Rail Band when that folded.

Fode Lassana Diabaté on balafon
Born in Conakry, Guinea to a family of virtuoso balafon players, he studied traditional methods of playing before moving to Mali and experimenting with more innovative modes. He has appeared on albums by Salif Keita, Bassekou Kouyate, and Kasse Mady Diabaté among others, and has been a long-standing member of Toumani Diabaté's Symmetric Orchestra.

Baba Sissoko on talking drum
A multi instrumentalist, Baba played tamani and ngoni with the Instrumental Ensemble of Mali orchestra in the 1980's. His decades long career has seen him form his own group (Baba Sissoko & Taman Kan) and he's perhaps best known for high profile collaborations with a number of musicians, including a critically acclaimed 12 year musical relationship with Habib Koité.

Jose Angel Martinez on double bass
After studying at the Conservatorio Estaban Salas, he's best known for his longtime work with Elias Ochoa.

Jorge Maturell on congas, bongos, cowbell
A graduate of the Escuela de Nivel Medio Superior de Superación Profesional, he's recorded a number of albums, one of which won the EGREM Prize in 1996, the prize of Bienes de Fondos Culturales.

Onsel Odit on chorus vocals, rhythm acoustic guitar
He won first prize in the OTI performance competition in 1998 and represented Cuba in the International event in San José in Costa Rica. Onsel has recorded a number of albums and been a member of Grupo Patria, among others.

Eglis Ochoa on maracas, guiro, chorus vocals
He began his musical career by studying the violin, joining father Eliades Ochoa as a full time member of Grupo Patria as vocalist and percussionist, where he has remained until this day.