El Anatsui: When I Last Wrote to You About Africa

on October 10, 2010
El Anatsui: When I Last Wrote to You About Africa
Royal Ontario Museum - Toronto
on view in the ICC till January 2, 2011 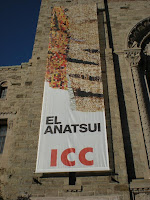 is a magician, a creative spirit who can take refuse and turn it into shimmering beauty. To see a room full of his work is to appreciate both his vision and his sense of innovation in pieces that vibrate with the colour and life of contemporary Africa. Born in Anyako, Ghana, he's been a Professor of Sculpture at the University of Nigeria, Nsukka since 1975.

I'm actually a relative newcomer to the appreciation of El Anatsui's work. Late last year, while I was visiting New York, I stopped by to speak with Bill Karg in his Contemporary African Art Gallery in the Upper West Side. As a point of fact, I was sitting just beside El Anatsui's Tagomizer while Bill and I talked about other artists in his gallery. The conversation naturally turned to the amazingly intricate 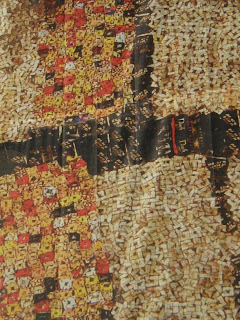 piece I'd been examining, and it was Bill who first told me that Tagomizer (which belongs to him) would be part of the artist's retrospective, with the show opening up in Toronto. I'd been looking forward to this retrospective since then, and I caught it on opening night - Nuit Blanche, with line ups of art revellers down the block when they opened the doors at 7pm.

As you come into the ROM's ICC (Institute for Contemporary Culture), the first wall is devoted to a kind of graphic time chart of his career, one that puts all the pieces in the show into chronological context. His sculptural and installation work has taken various directions depending on the media he's experimented with over the years.

Earlier pieces include figurative sculptures, like the broken ceramic heads in 1977's Chambers of Memory. Works in wood include the Old Cloth Series of 1993, being a wall sculpture made up of pieces of wood, and other rougher hewn sculptures. He used pieces of driftwood (nature's refuse) to create a particularly poignant grouping called Afua's Surviving Children, which was part of a festival in Copenhagen in 1996. 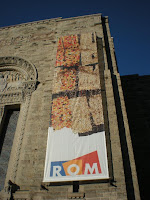 It's when he turned to metals that he began to create the very unique and striking works that he's probably best known for worldwide. 1999's Peak Projects is a floor sculpture that rises and falls in gleaming coppery peaks made from Peak brand milk can lids. I loved Open(ing) Market, a playful piece that takes up a large space on the floor and consists of tin boxes, handmade by tinsmiths. Each is opened to reveal decorative painting both inside and out. It was delightfully colourful and busy and infused with the essence of traditional African marketplaces.

In 2002, he found a bag of discarded aluminum tops from liquor bottles, and he began to develop the process he's still exploring today. Pieces are cut from the bottle tops, flattened and then assembled together with copper wire in a meticulous process - he runs a studio with several assistants to aid in the work. He calls the pieces cloth, and you can check out the details a bit in this video from the Met Museum in NYC. Liquor bottle caps, with their associations with the slave trade, 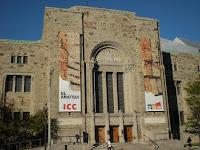 become the medium he uses to create tapestries of arresting beauty.

The results are quite stunning. From close up, you can see the incredibly patient work that goes into making and assembling all the pieces. From even a few steps away, those little pieces dissolve into a fluid, glistening curtain that undulates against the wall. To see so many of his pieces all in one place is to truly appreciate his genius, and kudos to the ROM for the exhibit's design. The larger space is divided by several temporary walls into a multi-chambered effect. It lets you appreciate each piece or small grouping on its own without being overwhelmed by a huge wall full of his large scale tapestries. The walls are painted a mid-blue that beautifully showcases the colour and textural appeal of all his pieces.

I was able to visit with Tagomizer again, hung on a wall with some contrasting pieces in wood. Organized by the Museum for African Art in New York City, the show moves on to inaugurate their fabulous new home on Museum Mile for its opening in spring of 2011. And even when the 60 pieces in this first ever solo show on Canadian soil make their way south, he leaves one specially commissioned by the ROM for permanent exhibit.

There are no photographs allowed at this show - hence the images made up of the ROM's advertising, which don't do his work justice. Nor do the photographs or videos that I've seen. You really need to get there and see it before it closes.
african art contemporary art El Anatsui ghanaian artist museum for african art royal ontario musuem toronto art scene