on October 29, 2010
From a variety of sources - I'm checking out this off-Broadway show in my next trip to the city - sounds like fun - and in the meantime, here's the important stuff first:

With the code DATING, any of my readers can get special discounted $45 tickets - for details and to order check here

During the summers that I was 17 and 18, I worked in a summer camp as a counselor. The camp was situated 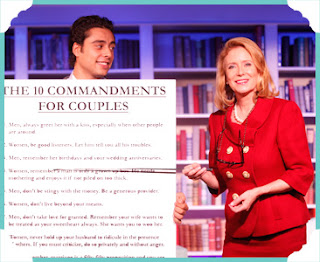 on the grounds of an old farm in the Caledon Hills north of Toronto, and the counsellors used one of the out buildings to hang out in. One day, we found a book, a dating guide from the 1950's, and it provided hours of humour as we'd dig up gems on how to conduct yourself as a lady circa 1950.

So, the very idea of Miss Abigail's Guide to Dating, Mating and Marriage brought an immediate smile to my face. The show, which just opened off-Broadway, stars Eve Plumb - Jan Brady! - in the role of Miss Abigail, a relationship expert to the stars and her sexy young sidekick Paco (Manuel Herrara) as they travel the world teaching Miss Abigail’s wonderfuly dated "how-to's" on dating, mating and marriage.

The 90-minute comedy has gotten good notices, and includes gems of helpful advice like how to have a perfect kiss (it’s all about lip position) . . . what you should and should not talk about on a date (don’t mention your troll doll collection) . . . and how to let a man think he wears the pants. 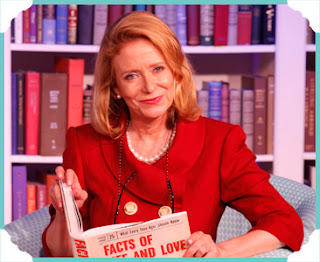 Miss Abigail takes you back to a simpler time, before booty calls and before speed-dating . . . back when the divorce rate wasn’t 50% and when ‘fidelity’ was more than an investment firm.

Miss Abigal the stage show began with Miss Abigail the Book . The real Miss Abigail is one Abigail Grotke of Takoma Park, MD, who began collecting vintage dating advice in book form around 1985, amassing a collection that now boasts more than 1,000 books. She made a conscious decision to limit her scope to those published before 1970, and began dispensing her classic relationship advice on the web.

From her website, she has this to say about her material:

Good illustrations, good advice for the times, a historical perspective, and especially the humor ~ that is what I search for, and, luckily for you, have been able to find! By the way, although some of this may seem authoritative, please be aware that I don’t take anything I read in these books very seriously. For example, the advice in a chapter titled “Never Go to a Man’s Apartment” from The Unfair Sex (1953) is probably not very realistic for our times. But then again, the next chapter in that same book is titled “What to Do When You Get There,” so maybe we should not dismiss what our mothers and fathers and grandmothers and grandfathers were told!

EVE PLUMB
(Miss Abigail) started her acting career at age six, when a children’s talent agent moved in next door to her family in Los Angeles. Soon afterwards, she went on her first commercial audition, for fabric softener, and got 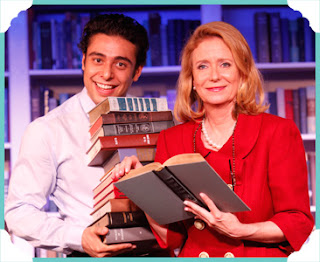 the job. That appearance led to roles on television shows. The then10-year-old Eve went on an audition for a new show entitled The Brady Bunch and didn’t make the cut. Later she was called into the offices of director John Rich and producer Sherwood Schwartz, who liked her previous credits and thought she looked like Florence Henderson, who was cast to play the mother.

The show ran for five years and was to make television history (although no one knew it at the time). The Brady Bunch continued to be popular for many years, giving birth to TV movies and series, along with other work on TV. In addition to her television work, Eve studied improv comedy at The Groundlings School in Los Angeles and has appeared in many smaller theater productions. In 2010, Eve appeared at Lincoln Center with Florence Henderson in Broadway Backwards 5.

An accomplished fine art painter, Eve is currently represented by several galleries across the US and often appearing at opening celebrations. 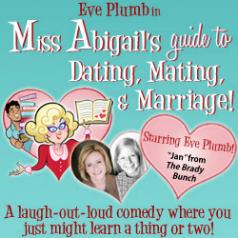 Sarah Saltzberg (Co-Author):
On Broadway, Sarah Saltzberg played Logainne Schwartzandgrubenairre for two years in The 25th Annual Putnam County Spelling Bee. She created and developed her character in C-R-E-P-U-S-C-U-L-E (upon which Spelling Bee is based), which she co-produced at the Theatorium in NYC, and appeared in both Barrington Stage productions. She most recently appeared in Fat Camp at the NYMF, and has appeared off-Broadway in JUNIE B. JONES (Lucille Lortel), in her one-woman show Dear Diary (Broadway Spotlight Series, Ars Nova), as well as throughout NYC in long-form improv comedy with the Upright Citizen's Brigade.
brady bunch dating advice eve plumb ken davenport miss abigails guide new york theatre off-broadway theatre