M. Nahadr & Ntozake Shange Live (and in Film) in NYC

M. Nahadr, "I Found God In Myself" in For Colored Girls 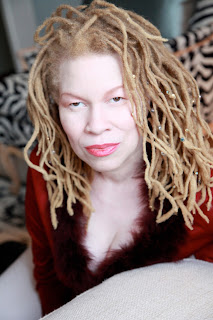 Sometimes in life we get lucky.  Our paths cross with someone who inexplicably changes us forever.  You could certainly say that when internationally acclaimed performance artist, M. Nahadr, and award winning playwright and poet, Ntozake Shange met, something just like that happened.

"Our friend Claude wanted to introduce us and asked me to pick Ntozake up at JFK," M. recalls. "We completely, immediately resonated and it was wordless. Our meeting was completely wordless, and it was wonderful."

M.'s distinctive looks and multi-octave powerhouse of a voice set her apart, yet also led her to a revelation of our shared humanity, our common difference. "I was a little girl that looked like Hayley Mills in The Parent Trap, living in an all African-American neighborhood in America," she recollects. "What I experience on Planet Earth as a person with albinism is the oneness of one story told. Everyone has the experience of being different. Period. That's the lowest common denominator."

"When I first hear her, I thought that M. had fallen from the sky; her voice was tying the heavens to the ocean, because of the range of it and the holiness of it," Shange explains. "I don't mean holiness in a religious sense, but the inescapable 'sacredness' of her voice, as if there were a holiness in her voice that could lift you off your feet."

At the heart of M.'s work lies something she found she shared with Shange: the spark kindled by free jazz and its invitation to open improvisation. They will explore this approach further at the Nuyorican, as part of Shange's acclaimed stage work, Lilianne: Resurrection of The Daughter

"I found it so interesting, our shared interest in free jazz," reflects M. "Ntozake is so highly educated and her work is so respected, but her inspiration was free jazz, creating in the moment." 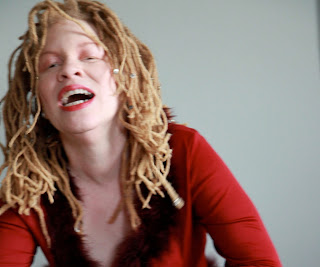 This improvisational urge, while sparking a creative friendship with the poet, pushed M. into a heartfelt response to Shange's words, to the closing poetry of her complex, polyphonic exploration of women's lives and fates. Shange had invited M. to compose something for that critical moment, something Shange felt truly represented the essence of her poetry. The resulting song was eventually woven into Perry's film version.

The task proved daunting at first. "I meditated on it for a few months. It felt agonizing," M. smiles. "I did take my time, however; I didn't want to create something that was contrived. I waited for the inspiration. One day, at the eleventh hour, I woke up at 8 am, wrote the song, and immediately felt relief. I was so happy: I knew it was honest."

M.'s soulful reaction to Shange's glorious declaration of acceptance and love falls squarely in the r 'n' b realm, while keeping M.'s signature edge. "I Found God In Myself (Ntozake's Song)" moves from Shange's words to M.'s, in a gospel-inflected statement of discovered joy.

This song, dedicated to Shange, will be exclusively available on iTunes November 1.

Beyond her work with Shange, M.'s deep-digging voice and unique beauty will be featured in an upcoming independent French film starring Charlotte Gainsbourg (daughter of the notorious Serge) and produced by Lars von Trier, scheduled for release in January 2011. Hot on the heels of her film appearance is a new album, Mem, due out in April.

Until then, M. is savoring her work with Shange. "I get to sing to and with a healing poet," she sighs. "It was an act of trust on Ntozake's part, because of our shared resonance, and I love honoring that."

Not only will this song, "I Found God In Myself," be featured in the upcoming major motion picture, the adaptation of one of Shange's most revered works, M. and Shange will share the stage at the film premiere, and for a series of spoken word and improvised free music performances at the Nuyorican Poets Café November 8-17, 2010 at 7 PM. (see details above!)
for colored girls free jazz improvised free music m nahadr nouyorican poets café Ntozake Shange poetic heritage festival spoken word in new york tyler perry