Love on her breast sits panting and swells with soft desire, no grace or charm is wanting to set the heart afire...

Opera Atelier's co-Artistic Director Marshall Pynkoski mentioned that the show that opens their 25th season is a simple production by Atelier standards - only one costume per singer/performer, and only one 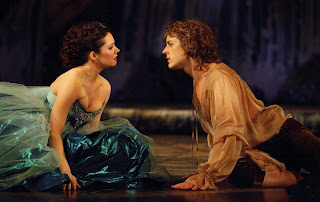 stage setting. Other than the dancers, the action on stage was fairly limited, with the lovers Acis and Galatea often simply entwined in each other's arms. Credit then the core strengths of the company - the music and performance - for delighting the audience with Handel's retelling of the Greek legend.

The story (in its abbreviated, simplified version - you know those Greek myths!) goes like this: the shepherds and shepherdesses of Arcadia live an idyllic existence in the woods, along with the water nymph Galatea. Galatea has fallen in love with one of them, Acis, who returns her devotion, despite the warnings of the spirit Damon about the dangers of loving an immortal. They are very happy... but as in all Greek myths, mortal happiness cannot last. Enter Polyphemus the monster, a Cyclops who is also smitten by Galatea's beauty. Acis wants to fight him off, but Galatea persuades him not to. Polyphemus throws a boulder on Acis, killing him in spite. Galatea, who is after all semi-divine, cannot bring him back to life, but transforms him into a stream wherein she can dwell and he can murmur of his love for her forever as he irrigates the Arcadian fields.

Soprano Mireille Asselin brings just the right pureness of tone and sparkling immortal charm to the role of the affectionate water nymph, and she's perfectly matched by a soulful Thomas Macleay in the role of the devoted shepherd. Earnest and sincere, they created a lovely romantic chemistry on stage. While the two lovers played it straight of necessity, they were wonderfully constrasted by the roles of Damon and Polyphemus. 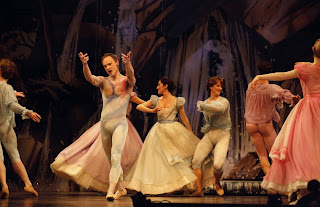 Lawrence Wiliford struck just the right note as the sometimes good, sometimes questionable supernatural being Damon, providing many of the piece's comedic moments in his reactions to the lovestruck mooning of the couple and complications of the Monster Cyclops. He's also a marvelously athletic dancer, with an acrobatic leap here and there to punctuate the words. Baritone João Fernandes attacked the bad guy role with gusto, featuring a nice dramatic sensibility and a powerful voice to match.

I think it's a sign of Opera Atelier's deep familiarity with the work that they were able to play with it, introducing notes of humour both intentional and not in the original early 18th century score - as in the Happy, happy, happy are we! chorus and some of the staging. And though "simple" by Opera Atelier standards, the setting was imaginative, using a pastoral painted 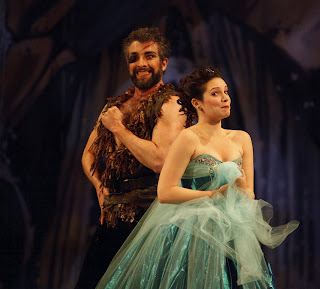 backdrop and a layer of curtains that provided depth, along with a nifty cave opening device that revealed the nymph's lair. The costumes were gorgeous, with Galatea's sparkly green gown a stand out (as the dress of an immortal should be).

It's a thoroughly enjoyable evening of Baroque Opera to continue the company's longstanding legacy.