Run Away and Join the Cirque!

What do Cirque Éloize, Cirque du Soleil, The 7 Fingers, Cavalia and more have in common? Each of these circus groups feature graduates of Montreal's National Circus School. Since its inception in 1981, 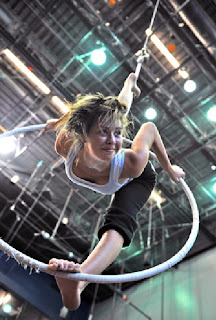 the School has trained most of Canada's circus performers. Graduates work around the world: in Canada, the U.S.A., Europe, and Australia. 95% of students find jobs.

See below for details for the School's first-ever cross-Canada pre-selection tour that will allow young circus-performer aspirants (ages 9-17) to have their potential evaluated in workshops while also learning more about the programs and the life of a circus artist. Register at nationalcircusschool.ca

October 12, 2010 - For the first time ever, Montreal's National Circus School will embark on a pre-selection tour in a cross-Canada quest for talented young people between the ages of 9 and 17. There will be stops in close to 20 cities coast-to-coast from October 31 to November 13, 2010.

The pre-selection tour is an opportunity for young people to have their potential evaluated and to meet the School's teachers, while also learning more about the programs and the life of a circus artist.

During the tour the School's teaching staff will hold workshops, with exercises designed to assess aspiring circus artists' calibre and potential to integrate into the School's programs. In particular, they will be tested for spatial orientation, coordination, flexibility, strength, stage presence (acting ability), movement and musicality (dance). In addition to this opportunity to be evaluated by circus arts professionals, young aspirants will attend a briefing on the School's training programs and learn more about the career of a circus performer.

This pre-selection tour also makes the entrance procedures more accessible to all young Canadians who wish to follow their dream of being a circus artist.

To participate in the pre-selection, applicants select the city closest to their hometown and register at nationalcircusschool.ca.

This new tour is in addition to the School's annual principal screening and audition, the official Entrance Examination, to be held in Toronto, Vancouver and Montreal in February 2011.

For close to 30 years, Canada's National Circus School has prepared circus artists for their professional careers. It has played a crucial role in the development of circus arts in Canada and around the world. Having trained nearly 400 circus artists, among which many have garnered distinctions at prestigious world festivals, the institution has become a world reference in its sector. A leader of the circus renaissance in Canada and North America, the Montreal based school has also contributed to the emergence of several prominent circus companies such as Cirque du Soleil, Cirque Eloize and The 7 Fingers.

Our graduates around the world!

The 7 Fingers
o Five of the seven founding members are School graduates
o Four shows on tour in Switzerland, France, Mexico . . . and a new cabaret was performed last summer as part of an international festival, Montréal
Complètement Cirque
o A score of graduates appearing in 5 shows
o The company's latest show, PSY, has 9 recent graduates in the cast. It was directed by Shana Carroll, who also trained at the School and directed Il fait dimanche, part of this year's student show presented last June at TOHU.
Cavalia
o Since its inception, Cavalia has hired several graduates as performers and called upon two graduates as artistic consultants.

NATIONAL CIRCUS SCHOOL FAST FACTS
o The National Circus School of Montreal was founded in 1981. Since its inception, the School has trained most of Canada's circus performers. Graduates are now working around the world in Canada, the U.S.A., Europe, and Australia. 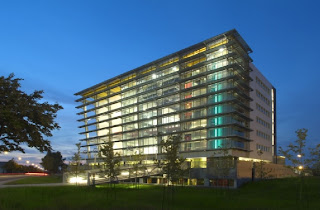 o Demand is high; more than 95% of students find jobs.
o The School's teaching and artistic staff includes more than 50 instructors, teachers and artistic consultants.
o The School has 150 students, 105 of whom attend full-time.
o In the fall of 2003 the School moved to an entirely new 7,200 square metre building especially designed to provide state-of-the art professional training in the circus arts. With new facilities catering to all disciplines while promoting safety, the School provides a unique learning environment.
o The School is now in a veritable "City" for the circus arts. This Cité des arts du cirque - ''Tohu'' - encompasses the Cirque du Soleil international headquarters, the National Circus School, a public space, and a performance hall designed to showcase the circus arts.
o Summer Camp - Initiation to Professional Training. A one or two-week intensive summer camp that allows young people ages 9 to 12 and 13 to 17 to experience professional training in circus arts.
o The National Circus School offers a complete range of professional training in circus arts, from preparatory to High School and Circus Studies (DES) to college-level (DEC) programs. Also offered are two college diploma programs (AEC) for circus arts teachers.
o Complete dormitory services for high school students from across the country are available. Comprising 23 housing units attached to the main building, the student residences mean the School can provide complete, practical and secure housing services 7 days a week.
circus cirque du soleil cirque éloize national circus school the 7 fingers totem by robert lepage