on October 16, 2010
I like mid-century modernist work - there's something brash about it in an almost naive kind of way. Also note that the images come from the building's former life as the Hummingbird Centre (I'll have to get some of my own soon) From a media release:

(TORONTO, ON)... As part of its 50th anniversary season celebrations, the Sony Centre For The Performing Arts presents an extensive exhibition of the work of painter/muralist R. York Wilson

beginning Friday, October 15, 2010. R. York Wilson's mural The Seven Lively Arts, has dominated the lobby of the Sony Centre For The Performing Arts since it was first unveiled on October 1, 1960.  The stunning 15 ft x 100 ft panorama of the arts through the ages remains a focal point of the Sony Centre's newly renovated lobby and is the centerpiece of the exhibition.

The Seven Lively Arts is made up of seven panels painted in an abstract, highly modernist style, each focusing on one of the lively arts, which include: painting, sculpture, architecture, music, literature, dance, drama. At the time of its completion in 1960, it was the largest mural in Canada and deemed an important contribution to Canadian art.

The exhibition entitled Extended Vision: The Art of Painter/Muralist R. York Wilson opens on Friday, October 15th, 2010 in the Sony Centre For The Performing Arts gallery (1 Front Street East) and runs until July 2011. Curated by Jim Miller, the exhibition includes over 100 original works drawn from the private collection of Lela Wilson, the artist's wife, and offers a glimpse of York Wilson's creative explorations from 1927 to 1981. 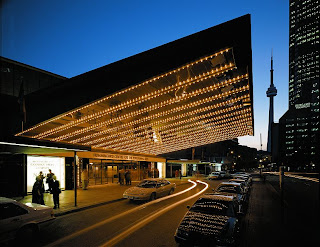 "My aim with this exhibition is to capture a sense of York Wilson's extraordinary work - as a muralist, a painter and commercial artist - to offer a glimpse of what made him one of Canada's leading artists," said Jim Miller, an award-winning artist, curator and filmmaker.  Following the opening of Extended Vision: The Art of Painter/Muralist R. York Wilson, Miller will be working with his partner, director Roz Owen, to complete Portrait of Resistance, a feature documentary about artist-activists Carole Condé and Karl Beveridge.

York and Lela Wilson travelled and lived in many parts of the world.  These journeys fueled York Wilson's creative explorations as is evident in exhibit sections featuring paintings from Mexico, ink drawings from Paris, and his brush paintings from Japan.

The segments of the exhibition about his mural works include preparatory studies Wilson made for the The Seven Lively Arts mural and documentary photos of its making.  Photographer Vid Ingelevics has documented some of York Wilson's other mural work, notably The Story of Oil at the former Imperial Oil head office, and these images are featured in the exhibition along with some of Wilson's work as a commercial artist.

R. York Wilson was awarded the mural commission to produce The Seven Lively Arts by a prestigious search committee headed by the renowned A. J. Casson from the Group of Seven.  As Wilson was recognized for his modernist abstract style, his artistic vision was well suited with the building's architectural and interior design. At the age of 16, Wilson began work as a commercial artist and there encountered established artists and mentors including A.J. Casson  and Charles Comfort. In the 1960s, Wilson was internationally renowned and his work flew off gallery walls and into private and corporate collections. Reviews of his work had catapulted him to the top of the Canadian art world. Wilson was exhibiting his paintings internationally and had competed several successful murals, most notably for the Redpath Library at Montreal's McGill University and the Imperial Oil Building in Toronto. In 1978, Marshall McLuhan wrote that his abstractions were "dramatic and majestic." The Uffizi Gallery in Florence commissioned Wilson to paint a self-portrait in 1981 to hang in its Vasari Corridor alongside such greats as Michelangelo and Leonardo da Vinci, making him one of only two Canadians to be so honoured (the other is David Blackwood). Before his death in 1984 at the age of 76, Wilson was acclaimed as one of Canada's greatest muralists.