Check them out here

[Toronto ON]  On Friday, November 5, raucous roots, genre bending string supergroup and this year's JUNO Nominees, Sultans of String, are serving up their spicy stew of Spanish Flamenco, French Manouche Gypsy Jazz, Middle Eastern Folk, and Cuban rhythms at Hugh's Room, as part of their 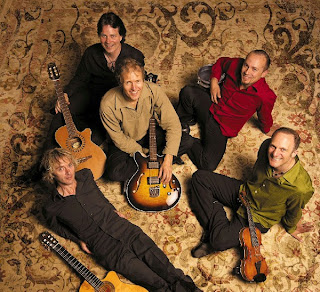 Since their formation only 3 years ago, Sultans of String have been riding a wave of success, from their debut CD "Luna" and 2nd offering, "Yalla Yalla" both hitting # 1 on world/ international music charts in Canada, to their triple 2009 Canadian Folk Music Award nomination, winning Instrumental Group of the Year. 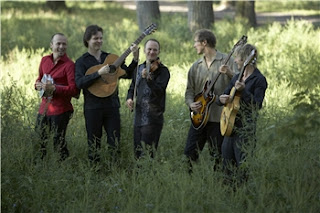 Picture this:  November, 2000 - multi-talented harmonica player, Mike Stevens, was on his way to entertain troops in Bosnia and stopped off in Goose Bay, Labrador for another performance.  In the local paper he read about a crisis at the nearby indigenous community of Sheshatshiu, Labrador, with young people sniffing gas and committing suicide.  He was offered a visit there and ran into some of them.  He engaged them in dialogue by playing his harmonica and listening to them.  The kids connected big time with the music.

Mike knew that music could help make connections.  He started to visit other remote indigenous communities with similar problems, taking his music and donated musical instruments and leaving them for the kids.  In 2002, other artists under the guiding hand of the late Estelle Klein got together to form an organization to support Mike’s efforts.  ArtsCan Circle was founded.

Since then, ArtsCan Circle has visited ten indigenous communities in Northern Ontario, Labrador and Nunavut, and now sends teams of volunteer musicians and visual artists to engage youth in hands-on workshops in all aspects of arts.  Musical instruments, art supplies and recording studio equipment have been brought to the communities to facilitate young people finding their own voices and creating their own art and music.  ArtsCan Circle now provides over 2,000 workshop opportunities for indigenous youth annually.  Countless volunteer hours help raise funds to send the teams north and create connections between communities in southern Ontario and across Canada with our neighbours in the far north.  Can one person make a difference?  Can music build bridges?
artscan circle chris mckhool folk music juno nominees string music sultans of string toronto live music world music