His work is currently on display as part of 131, a group show at the O'Born Contemporary Gallery till October 23, and he'll have a solo show there from March 17  to April 23, 2011.

I was interested in delving deeper into Rafael Goldchain's latest work after taking in a sampling of the images at 131 (pictured). "I'm really excited to be with this gallery. There's something fresh and youthful about 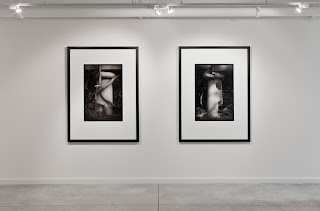 them," Rafael says. The large black and white prints feature a series of concrete columns in varying stages of repair/decay and have a timeless depth about them.

"My pattern is to work on projects over a period of years," he explains. "That process changes everytime I'm in the same spot - when I'm done a project," he notes. 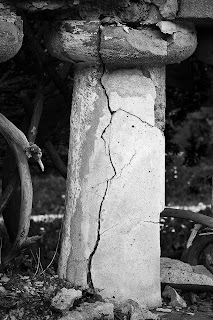 The new work comes on the heels of his highly regarded and very successful Familial Ground, a clever visual exploration of his identity in relation to his family through various generations that resulted in the book I Am My Family

. "I was really lost as to what I would do next," he admits - a position many artists are familiar with. "The new work is going to have some kind of connection to what I've done before," he says. "All of my work has to do with problems of identity."

Some time was spent considering ideas. "What ways could I look at my body?" he posits. "I was was stuck at that spot, so I took my camera with me everyday. One day, not too far from home, I came across something I'd seen before, but not really noticed." What he came across was a series of several concrete columns holding up a patio.

On closer examination of one of them, he found the inspiration that he was looking for. "It had a lovely crack in it," he notes. "Thats a really good analogy for my aging body. Not only physically, but emotionally cracked - and not in a funny way." It became a launching point. "That column really hit the spot."

He's been working on this series for about a year and a half. "Each column has a different individuality," he says. "Once you look at the crumbling and decay, other things come into play." More than just the visual 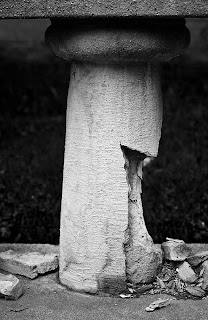 appeal presented by varying textures and forms, the juxtaposition of manmade structures and the natural order of decay becomes a metaphor for larger ideas. "The point at where the body and psyche meet. They are one indivisible unit." In one of the images, a root twists around the column. "One the one hand, it protects, and on the other, it destroys."

The series is still a work in progress. "I'm still thinking about this, and right now my ideas are probably still fairly sterotypical, because I'm not a deep thinker," he laughs. I would beg to differ.

In addition to his artistic work, Rafael Goldchain is Coordinator of the Applied Photography Programme at Oakville's Sheridan College.

(And just to be honest, I do work at Sheridan on a part-time basis, although not for Rafael or the Applied Photography programme.)