on October 09, 2010
With some material from a media release: 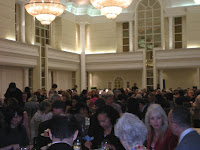 “A city is created and defined by its people. Our artists allow us to connect and communicate with one another and to forge bonds between our cultures and neighbourhoods,” outgoing Mayor David Miller stated in his welcome message. “By telling each other's stories and creating a welcoming environment for newcomers the arts contribute to a city which both celebrates cultural diversity and engenders social cohesion.“

I was just saying that the other day! With an Advisory Panel that includes city notables like Margaret Atwood, Atom Egoyan, Norman Jewison and David Mirvish, (among others,) the Toronto Arts Foundation Awards carry some clout, and the Awards Lunch yesterday drew a room full of luminaries from both the arts and business worlds. Naturally, I was on the guest list (he he). 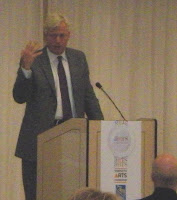 Mayor Miller, (and no matter what your assessment of him as a politician, he has always been a friend to the arts in this city,) was the recipient of the gift of a poem - Thirteen Ways of Looking at a Mayor as read by actor Eric Peterson. Rather charmingly, the Mayor was blushing as he took the stand, and he went on to speak enthusiastically about the unique nature of Toronto and the importance of the arts not only at the large and institutional level, but within the fabric of community life. He mentioned, for example, the infamous billboard tax, the revenues from which go entirely to support the arts. He credited councillor Shelley Carroll for that move, and went on to mention other members of city council with strong committments to the arts. His standing O after the speech came as no surprise. 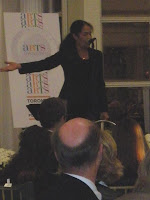 After a performance by singer Molly Johnson, (pictured right,) the awards were presented.

The winners of the 2010 Toronto Arts Foundation Awards are:

BMO Financial Group, since 1817, has believed in community reinvestment and corporate and social responsibility to the communities it serves.  BMO Financial Group is one of Canada’s top corporate donors and remains steadfast in the belief that arts and culture enrich all our lives.  BMO is being recognized for its long-standing commitment to mid-sized Toronto theatre organizations, as it continues to support companies who take profound artistic risks, forge new producing and presenting models and push ideas of what theatre might be.

Jamie Travis is a Toronto-based filmmaker who has written and directed two trilogies of award-winning short films. His six shorts – Why the Anderson Children Didn’t Come to Dinner, The Saddest Boy in the World, The Armoire and the Patterns Trilogy – all premiered at the Toronto International Film Festival and went on to international acclaim. Critics have drawn comparisons to Travis’ work with filmmakers as disparate as David Lynch, Alfred Hitchcock and Todd Solondz. Travis’ growing body of work was played extensively in film festivals and at art galleries, from Toronto to Sundance to the Pompidou Centre in Paris. 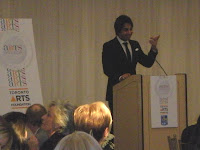 José Ortega has served as the Artistic Director of Lula Music and Arts Centre and the live music Lula Lounge for almost a decade. As the artistic director of LMAC, José also oversees the organization’s outreach and educational programs – including the family dance series, high school programs and musicians’ workshops. As a volunteer, Ortega has contributed his expertise in World and Latin music to programming committees for Harbourfront’s Ritmo y Colour festival, Salsa on St. Clair, Samba on Dundas, and Luminato.  An internationally-recognized commercial illustrator and public artist, José has generously donated his artwork to countless projects, including CD covers, postcards and posters for concerts at Lula, and for Samba on Dundas and Salsa on St. Clair. (Emcee Jian Ghomeshi is pictured above.) 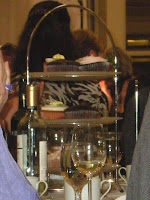 Mallory Gilbert joined Tarragon Theatre in 1972, serving as General Manager from 1978-2006, and is currently an arts consultant for small to mid-sized theatre companies.  She served on the board of PACT for over 20 years and was its President from 1989-1993.  One of the founders of Creative Trust in 1998, she is currently the President.  She has received many awards in recognition of her achievements and contributions to Canadian theatre and in 2006, Tarragon Theatre and PACT jointly created an annual award in her honour – The Mallory Gilbert Leadership Award.  She was made a Member of the Order of Canada in 2007.
jamie travis lula lounge mallory gilbert manifesto community projects mayor david miller molly johnson tarragon theatre toronto arts foundation awards toronto arts scene