on November 19, 2010
I'll have more about globalFEST 2011 in the next little while, but for now here's a spotlight on one of the acts making a North American début: 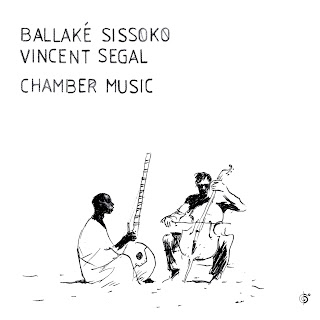 In this age of hi-energy, electric cross-cultural collaborations, Sissoko, a traditional kora player and Ségal, a French cellist, remind us that there's still room for refined world music.

Mention "chamber music" to someone and they'll probably, after yawning a bit, think of a salon in Paris or a music hall in Vienna.  That's Paris or Vienna a hundred years ago, mind you.  Now, finally, in an age when global pop is made in studios in Mumbai, Rio De Janeiro, and Dakar, two gifted musicians have found a way to make a global chamber music for the 21 st century audience.

is a collaboration between Ballaké Sissoko, who plays the traditional kora, a lute-harp from Mali, and Vincent Ségal, the French cellist who plays for the trip-hop band Bumcello

.   It is also, quite simply, one of the most elegant and beautiful recordings of "world music" in recent years.  At a time when cross-cultural music has tended toward highly-caffeinated electric pop and dance music, Sissoko and Segal remind us that there is room - and maybe even a need - for a quieter, more refined world music.

Both musicians have displayed an aptitude for defying expectations - the list of trip-hop cellists is pretty short, after all.  And Ballaké Sissoko has become a familiar name on the world music scene through his work with American blues legend Taj Mahal and Italian minimalist Ludovico Einaudi, among others.  But perhaps the combination of kora and cello works so well because there are no expectations for it.  The collaboration grew out of a personal friendship, and at no point was there an attempt to produce a record that would be slick and hip and commercial.  Yet it has become one of Europe's most buzzed-about world music recordings in the past year. 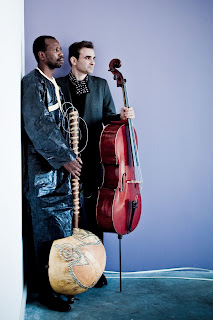 Chamber Music is largely a duo project, with the occasional guest adding percussion, voice or other strings to vary the texture.  But even when it's just Sissoko and Segal, there's a surprising array of moods.  The title track actually sounds somewhat reminiscent of Western chamber music - there's a rhapsodic introduction on the kora, then a stately chord progression and a graceful melody shared by both instruments.  The cello, when played pizzicato, or plucked like a bass, proves to be a wonderful foil for the kora.

"Oscarine," on the other hand, is a rhythmic vamp that recalls the Afro-centric jazz of pianists like Randy Weston or Dollar Brand.  The pizzicato and slap effects on the cello create a familiar-sounding groove and the kora floats above with Sissoko providing some increasingly filigreed improvisations.  Then there's "Wo Ye N'gnougobine." Here the rhythms are distinctively West African, and the folk-like melody could be centuries old.  Even Ségal's cello fits right in: he lightly bows the strings to produce a sound that clearly recalls the traditional njarka fiddle.

Another traditional string instrument, the lute known as ngoni, appears on "Houdesti," a quartet for kora, cello, ngoni, and balafon , the West African wooden xylophone.  Vincent Ségal turns a neat musical trick here, plucking the cello so that it blends imperceptibly into the rhythm section of balafon and kora, and then gradually bringing the instrument to the foreground by bowing it.  It sounds like a bit of Western music growing out of a fertile African base - an appropriate sound for a song that features the ngoni, the African ancestor of the banjo.

Another striking sound from the West African tradition is the karignan, essentially a pair of metal castanets.  Its gentle jangling sound, paired with a loping rhythm on the kora, drives the catchy "Ma Ma FC," and adds punctuation to the restrained but emotional "Regret - a Kader Barry," a tribute to the late singer of that name.  Singer Awa Sangho adds the album's only vocals; if Chamber Music is indeed a modern, global form of chamber music, then "Regret" is the album's "art song."

Much of this Sissoko/Ségal collaboration inhabits a twilit world.  The bittersweet, elegiac melody of "Mako Mady" and the lamenting cello line in "Histoire de Molly" suggest the dusky poetry of English songwriter Nick Drake, without using a single word.  The latter song's kora-as-troubadour-harp patterns, and the gently rocking two chord sequence that underpins "Halinkata Djoube" both echo the spare, direct simplicity of Erik Satie, the French composer of the turn of the 20th century.  The result is music that operates at a different pace.

Chamber Music was recorded in the Moffou Studio, founded by the great Malian singer Salif Keita to provide a world-class environment for musicians wishing to record acoustic, perhaps even authentic, African music.  (Keita's own acoustic album, Moffou, was recorded there.)  The cello, of course, is not a traditional African instrument.  But Chamber Music , in its depth of feeling and variety of moods, is authentically African.  And the kora may not appear in the duos, trios, or quartets of Beethoven, Schumann, or Brahms; but the obvious musical and personal connection between Ballaké Sissoko and Vincent Ségal also marks this as an authentic, if original, type of chamber music.