on November 28, 2010
Sponsored by the Délégation générale du Québec à New York, the gala screening will include a live Q&A with filmmaker Tetchana Bellange and poet Sonia Sanchez.

GALA SCREENING
HOSTED BY SONIA SANCHEZ
as part of the African Diaspora Film Festival
Wednesday, December 1 @ 8PM – The Chapel (details at the bottom)

history textbooks' version of events - one of slavery in Canada's past. While it's true that Canada was also a haven to slaves via the Underground Railroad in the first half of the 19th century, it's a little known/discussed truth that slavery also existed here for about two centuries until it was officially abolished in 1837.

More specifically, the documentary tells the story of Marie-Joseph Angélique, a slave who was tried and convicted of setting the fire that burned down a large part of Montréal in 1734. In a particularly horrific twist to the true tale, she was convicted not only to hang, but was tortured, her legs crushed in an attempt to get her to name an accomplice.

It's a dramatic story that's all the more so for its virtual exclusion from the Canadian consciousness for centuries. It came to the attention of filmmaker Tetchana Bellange while watching TV. "I saw an interview on the French history channel with Marcel Trudel, talking about his book on slavery in New France. I was flabbergasted. I had no idea there was slavery in Canada."

It piqued an interest that led her to look further, reading up on the subject from the few books available

. She also paid a visit to the Montréal archives where she found the only original material still in existence. "In the archives was the minutes of the trial," she explains. Tetchana became fascinated with the personality that emerged from the pages - "this fiery woman who refused to remain a slave" as she calls her. Angélique openly had a white man as a lover, (an indentured servant from France,) and wanted to live with him.

Tetchana took a diverse approach to bringing the story to film. "The film is a mix between theatre and documentary. We filmed the theatre, a bit like Dogville." The theatrical segments re-enact key parts of the story, and come from the play on the same subject that she brought to the stage previously. "I'm also an actress," she explains. "I worked for three years on a stage play - but then, after 3 weeks, it's over." She believed the story and its themes merited a wider audience.

So far Les Main Noires has screened in two festivals in Québec, including the World Film Festival in Montreal. The December 1 gala will be its US Premiere.

The project has had some unexpected results. Tetchana is the child of Haitian immigrés. "I didn't feel, before I knew this story, that I had roots here." That changed once she'd started her research. "There's a lineage of black history in Canada," she marvels. 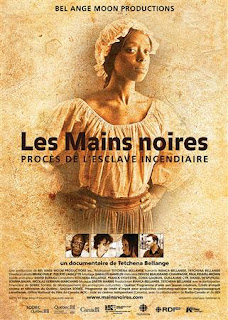 It's led to inevitable comparisons with the lot of black women in today's world - one that is still far less than ideal. "As a black woman, I don't see myself enough in the media," Tetchan says. "They always say 'there aren't enough stories about black subjects...' - this was a good way of proving that wrong." She's currently working on another documentary about black women in the media, featuring black actresses and their experiences, among others.

"Just as Angélique always refused to submit to the archetypes they wanted to force on her - it's a natural extension of Angélique's story."

The various books and discussions on the topic have posited various theories about the outcome of the trial, including everything from suggesting Angélique set the fire to get back at an abusive owner/boss (she was about to be put for sale,) to it being the work of a white nobleman, with her as the easy scapegoat. Black Hands takes the latter tack. Wherever the truth lies in this particular story, however, it's clear that the notion of Canada as being blameless in the slave trade is entirely false.