on November 09, 2010
From a media release - I just intereviewed a photojournalist a little while ago - Ed Ou - this sounds very interesting: 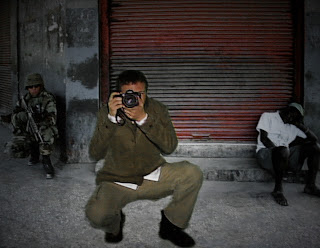 Recipient of a Fresh Ground new works award, Harbourfront Centre’s national commissioning programme, Boca del Lupo’s latest creation is a recollection of the life of a war photographer as seen from his eyes and through his lens. PHOTOG runs November 17 through November 20 at Harbourfront Centre’s Enwave Theatre. 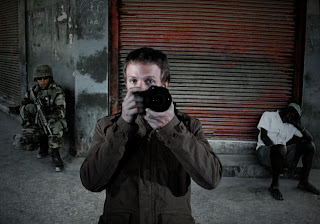 Kamber and Farah Nosh, PHOTOG examines the juxtapositions and internal struggles that many photographers experience between foreign soil and home turf; between privilege and suffering; between disconnect and belonging; between war and peace.

Thomas Smith is an amalgam of these award-winning international photojournalists and Boca del Lupo fuses the unfolding of his imagined life with dazzling computer animation, real-time video, startling images and physical theatre. PHOTOG stimulates a deeper reflection into the internal struggles that a conflict photographer brings back from war above and beyond the photographs.