The Global Africa Project Explores the Impact of African Visual Culture on Contemporary Art, Craft, and Design around the World

Opening at MAD on November 17, 2010, Groundbreaking Exhibition Challenges Traditional Conceptions of “African” Aesthetic
On view to May 15, 2011

contemporary African art, design, and craft worldwide, The Global Africa Project premieres at the Museum of Arts and Design (MAD) on November 17, 2010. Featuring the work of more than 100 artists working in Africa, Europe, Asia, the United States, and the Caribbean, The Global Africa Project surveys the rich pool of new talent emerging from the African continent and around the world. Through furniture, architecture, textiles, fashion, jewelry, ceramics, and basketry, as well as selective examples of photography, painting, sculpture, and installation work, the exhibition actively challenges conventional notions of a singular African aesthetic and identity, and reflects the integration of African art and design without making the usual distinctions between “professional” and “artisan.”

On view through May 15, 2011, The Global Africa Project has been organized by MAD and the Center for Race and Culture at the Maryland Institute College of Art (MICA).

Visitors and scholars can read about the development of the project through a behind-the-scenes blog on MAD’s website.

During the exhibition, you can participate in an online discussion of its key issues with exhibition curators, artists, scholars and other experts in the field on a microsite called Africa Talks . 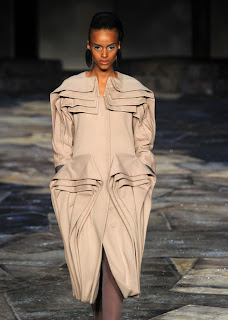 In conjunction with the exhibition, American designer Stephen Burks has been commissioned to create a special installation Are You a Hybrid?, which will examine the impact and influence of Africa on contemporary design. On view from February 22 through May 15, 2011, the installation is part of the MADProjects exhibition series, which explores emerging trends and innovations in the design world. (Black Coffee design pictured left)

“The Global Africa Project charts important new territory in the field by actively looking beyond restrictions of traditional art historical groupings, including medium, geography, and artistic genre,” states Holly Hotchner, the Museum’s Nanette L. Laitman Director. “By many measures, this exhibition is entirely unprecedented and it is a landmark moment in our history. As a museum that has long challenged the hierarchies separating art, craft, and design, we are delighted to introduce these new explorations of contemporary African art and aesthetics.”

Co-curated by Lowery Stokes Sims, MAD’s Charles Bronfman International Curator, and Leslie King-Hammond, Founding Director of the Center for Race and Culture at MICA, The Global Africa Project showcases a diverse group of creators, including artists who are experimenting with the fusion of contemporary practices and traditional materials, and design collectives that are using their creative output as 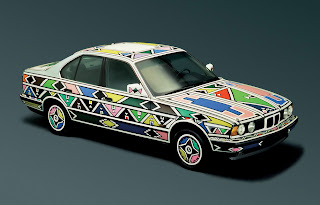 “Given the nomadic, even migratory, nature of artistic careers today, the interesting challenges of presenting an exhibition like The Global Africa Project are indicated in its very title,” notes Lowery Stokes Sims. “The exhibition addresses important questions of how these designers, craftsmen, and artists grapple with issues of commodification in art production, and the meaning and value of art in contemporary society.”

Adds Leslie King-Hammond, “No longer are these artists viewed as part of the periphery of the main stream art world. This work redefines a new center of creativity and innovation for the twenty-first century.”

In order to present various dimensions of the work of African artists and artisans worldwide, The Global Africa Project is organized around several thematic ideas. These include: the phenomenon of intersecting cultures and cultural fusion; the branding and co-opting of cultural references; how art and design is promoted in the international market and the creative global scene; the use of local materials; and the impact of art-making on the economic and social condition of local communities. In addition to providing a broad framework for the exhibition’s organization, these themes will encourage audiences to discern how global African artists grapple with the commodification of art production and the meaning and value of art in society—an increasingly significant issue for nations in a rapidly changing global context.

• Contemporary fashion by designers such as the Black Coffee Design Studio in South Africa, whose 2008 collection Everyonecanbeadesigner allowed the consumer to personalize their own style and presence; 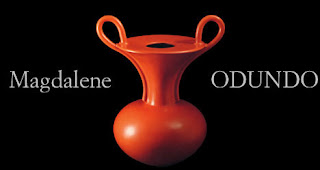 Sakina M’sa from the Comoro Islands whose Parisian clientele represents the “active, dynamic, chic, feminine, liberated and droll” woman, who is attracted to the experimentation with deconstructed apparel and multicultural references in M’sa’s designs; and Haitian-American Victor Glemaud whose menswear combines “classic masculine shapes” with “beefed-up pattern mixing” and mixes “cashmere with casual gear.”

• Installations, sculptures, and objects that incorporate and appropriate materials that have come to Africa as the “cargo” of international exchange—including packaging and manufactured items. Among these works will be furniture designed by Ousmane M’Baye of Senegal and a new site-specific installation by Nigerian artist Olu Amoda

, who transforms scrap metal to construct security gates for buildings in his community. The exhibition will also debut a new line of furniture created in Senegal from locally collected and processed recycled plastic by Bibi Seck of Birsel + Seck, a design firm based in New York City.

• The viability of traditional techniques of ceramics and basketry seen in the sweet-grass baskets of American Mary Jackson, whose work reflects a centuries-old tradition from West Africa; basketry by the renowned master weaver Reuben Ndwandwe of South Africa who revitalized this medium with his unique over-coiling technique; and the work of ceramist Clive Sithole, also of South Africa, who dared as a man to take up a medium traditionally associated with women.

• The transition of these techniques into the design and art arena seen in the ceramics of Magdalene Odundo, a Kenyan-British artist whose work is both highly contemporary and yet evocative of traditional Africa pottery and the exquisite beaten metal work of Ndidi Ekubia, who also lives and works in England. 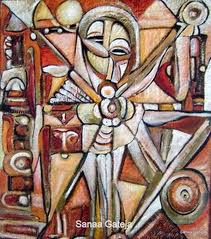 • The architectural designs of Mervyn Awon of Barbados and American Jack Travis who balance modernist design with cultural ethos; the conceptual architectural drawings of Andrew Lyght of Guyana who has worked in Canada and the United States; and the symbolic allusions to furniture and architecture by Cuban-born conceptualist Alexandre Arrechea working in Spain.

• Influential collaborations between traditional African artists and international designers and corporations, including Esther Mahlangu’s BMW Art Car, in which she transformed the 1991 car model with the bold shapes and colors typical of Ndebele house painting in her native South Africa; and an exuberant wall piece created out of paper beads fashioned from Obama campaign literature that came out of a collaboration between American artist Algernon Miller and designer Sanaa Gateja working with the Ugandan women’s collaborative Kwetu Afrika Women’s Association Angels - and you can check out more about her art and work here, (along with the image above).

CATALOGUE
The exhibition will be accompanied by a fully illustrated, four-color publication to be published jointly by the Museum and Prestel Publishers, in association with the MICA Center for Race and Culture. The approximately 280-page book will feature an introduction by MAD director Holly Hotchner; curatorial essays by Lowery Stokes Sims and Leslie King-Hammond; as well as contributions from scholars and curators who are conversant with the intersections between contemporary design, architecture, craft, art, and national and cultural craft practices.

PUBLIC PROGRAMS
In addition to the Museum’s on-going schedule of curator and docent-led tours, special programming for The Global Africa Project will include a series of lectures and panel discussions, which examine how physical, digital, and physiological environments have formed and informed expressions of African identity throughout the globe. From new and unexpected re-appropriations of modernist architecture in Africa, to the past 30

years of NYC club culture, as well as the Ganguro Girl phenomenon (a Japanese subculture where young woman weave their hair into cornrows and tan to look like their favorite hip-hop stars), the series, titled “Vibrant Space,” investigates how these rich and energetic environments play a vital role in the creation, evolution, and expression of contemporary global identity.

In February 2011, MAD will present the Global Africa Market, a special “pop-up” shopping event showcasing product from selected craft and creative collaboratives operating in Africa that serve women in particular.