on November 07, 2010
Jane Seymour at ArtTrax Gallery
Mississauga, Ontario
on view to November 19 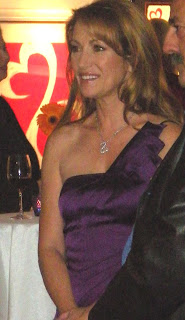 To actress and jewellery designer, you can add painter to the list of Jane Seymour's accomplishments. The former Dr. Quinn Medicine Woman star (and Bond girl

!) was in Mississauga this past weekend to promote her show of paintings.

The collection features crowd pleasing representational works, most of them nature based and often reminiscent of the English and French countryside. Sculptures of her signature "open hearts

" design were also on display, some in bronze with interesting patinas. Overall, the work is definitely in a romantic kind of vein, destined for an intimate home setting rather than museum hanging. "I don't do this to sell them, I do it because it gives me pleasure," she said. The tony crowd at the cocktail reception seemed to agree, lining up to purchase in a steady stream.

What catches the eye is that, despite the conventional subject matter, she uses a variety of techniques and media with a deft touch, producing a range of effects. There were a series of flower portraits in oils, each featuring a single bloom rendered in detail on either a black or flat coloured background. They had a nice three dimensional, sculptural feel and bold sense of colour. These were contrasted by her watercolours, with their fluid sense of motion and kinetic lines.

Some figurative piece included family and friends, and among them a portrait of her son Sean (pictured) in giclée. The pieces had a real sense of depth, and a mode that went from playful and impressionistic to more emphatic. An early work, Idaho, (pictured below,) leans towards an abstraction of the landscape. 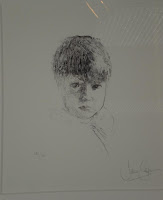 She mentioned that the subject matter is what dictates the style to her to a large extent, and noted that a busy career doesn't leave her with very much time to devote to painting. "But every once in a while, I'll have a day where I tell everyone to bug off and I paint. I've been known to paint for 12 hours at a time." 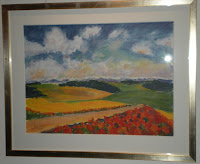 Jane says she's been drawing since she was a child, and had her own clothing line at age 15. "I wanted to be a ballerina," she remembers, "but I was injured - so then I became an actress." Son Sean, she reports, is now a strapping 6'+ 25 year old who is himself a photographer, and another, one of her 14 year old twins, is in a band. 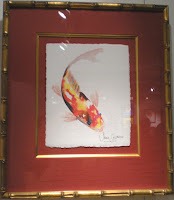 Does part of the appeal to her paintings lie in her celebrity status? In the world we live in, you'd have to say yes. Luckily, however, Jane has the artistic talent and skills, and some interesting stylistic variations, to add more than celebrity appeal to the results.