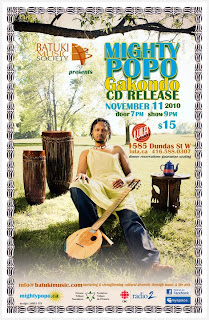 Mighty Popo’s latest recording ‘Gakondo’, which means origins or traditions in ‘Kinyarwanda’ is a journey to his Rwandan roots. Three ancient musical expressions intertwine to create the sound of ‘the country of a thousand hills’. Long ago, ‘Intwatwa’ songs of the Batwa people got mixed with powerful and rhythmic Bahutu sounds and the Batutsi pastoral melodies to form a singular music tradition.

Popo spent time researching the origins and the fusion of these sounds, working with traditional musicians and learning about the rich poetry of the Royal Court (Ibwami) and instruments like the ‘Inanga’.  The ‘Inanga’ is a shallow bowl carved out of wood and a single gut string woven back and forth across it, creating nine or more strings.

In exploring this musical heritage Popo found gems that he incorporated into this recording, which is a tribute to ancient songs and poems that tell the story of an entire culture.

On the title track ‘Gakondo’, Popo weaves Rwandan poetry, sounds and sensibilities into a song about his lineage.  This is an ‘amateka y’imiryango’, a family history revealing Popo’s blood ties to the ‘Abiru’, the high priests of ancient Rwanda and keepers of the dynastic codes.

On ‘Kamananga’, ‘Impunga’, ‘Impangaza’, ‘Uw’ibuhoro’ and ‘Nibarize’, Popo mimics ‘Inanga’ melodies on his guitar.  ‘Nibarize’ is sung in the ancient and now defunct Rwandan whispering style. Popo asks the custodians of Rwandan history to reveal the secrets of their art to him.  “Why does the sound of the powerful ‘Inanga’ still yield to the whisper of the artist?” he asks.

With ‘Urugendo’, ‘Ngire Nte’, ‘Rwatsinda’ and ‘Rwampunga’, Popo revisits traditional songs of praise for the achievements of kings along with the timeless themes of love and loss.  This is Mighty Popo’s first acoustic album written solely in Kinyarwanda, Rwanda’s only indigenous language.

Check him out in a video from a couple of years ago here.