The NFB at the International Documentary Film Fest - Amsterdam

Featuring world premieres of Prosecutor and the HIGHRISE: Out My Window installation

A fascinating story with extraordinary access, Prosecutor follows the Chief Prosecutor through the first trials 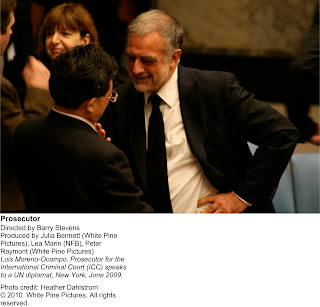 of the recently formed International Criminal Court. Luis Moreno-Ocampo investigates and prosecutes some of the world’s worst criminals for some of the world’s worst crimes. He’s a hero to genocide survivors, but has bitter enemies on both the Right and the Left. Prosecutor offers front-row seats to the historic events that will determine whether the ICC is a groundbreaking new weapon for global justice or just an idealistic dream. A National Film Board of Canada co-production with White Pine Pictures, Prosecutor was directed by Barry Stevens, produced by Julia Bennett and Peter Raymont (White Pine) and Lea Marin (NFB), and executive-produced by Peter Raymont (White Pine) and Silva Basmajian (NFB).

HIGHRISE
Creators: Katerina Cizek and Gerry Flahive, The National Film Board of Canada

HIGHRISE is a multi-year, multimedia, collaborative documentary experiment about the human experience in 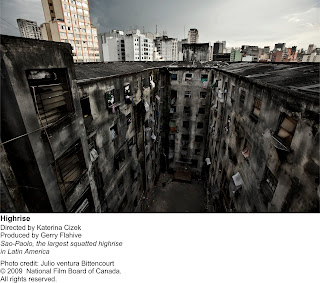 global vertical suburbs. Its first international production, Out My Window, is also one of the world’s first interactive 360º documentaries. Delivered entirely on the Web, Out My Window is a journey around the world through the most commonly built form of the last century: the concrete-slab residential tower. Meet remarkable high-rise residents in 13 cities who harness the human spirit — and the power of community — to resurrect meaning amid the ruins of Modernism.

This Land
Creators: Dianne Whelan, Jeremy Mendes and the National Film Board of Canada

Keep your batteries in your bra. Stay together, stay alive. Move slow: If you sweat you die. A 16-day 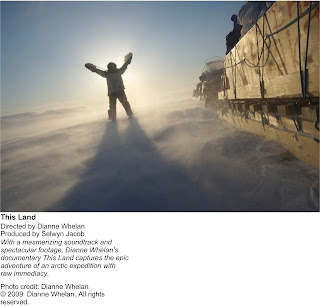 interactive photographic adventure where documentary filmmaker Dianne Whelan accompanies a military expedition to the northernmost tip of Canada to plant a single flag. Told through audio narrative, text, photographs and film, This Land maps out a 2000-kilometre voyage on which Whelan was not only the sole non-military officer, but also the only woman.

The Test Tube with David Suzuki
Creator: The National Film Board of Canada

An interactive parable about our insatiable appetites, the fallacy of growth, and the things we can and cannot change. By combining interactive video with live data pulled from Twitter, the story illustrates the problem of increasing consumption, unfettered growth and how all 7 billion of us are connected by a simple mathematical reality.

Welcome to Pine Point
Creators: The Goggles (Michael Simons and Paul Shoebridge) and the National Film Board of Canada

An interactive documentary about what happens when you lose your job, When everyone you know loses their job. When your entire town is out of work, is shut down and dismantled, and completely disappears. Welcome to Pine Point uncovers a place frozen in time and explores how our communities do more than define who we are. 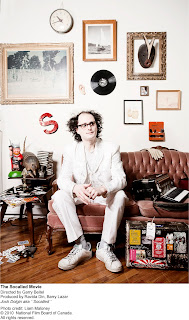 Meet Socalled, a.k.a. Josh Dolgin. He’s a multidisciplinary musician and artist whose unique blend of klezmer, hip hop and funk is blasting through the boundaries that separate music of different cultures, eras and generations. Socalled is unstoppable: a pianist, singer, arranger, rapper, producer and composer – as well as magician, filmmaker and visual artist. Produced by reFrame Films in co-production with the National Film Board, The “Socalled” Movie was directed by Garry Beitel and produced by Barry Lazar (reFrame) and Ravida Din (NFB).
documentary film idfa independent film international documentary film festival amsterdam national film board of canada NFB