on November 19, 2010
I really like their swingy "non-denominational" sound - from a media release:

The Café at the Edge of the World CD Release
The pickPocket ensemble Waltzes, Swings, and Stomps in Global Acoustic Intimacy

Creating music that "infuses the present with sounds of the past, providing an incredibly universal and 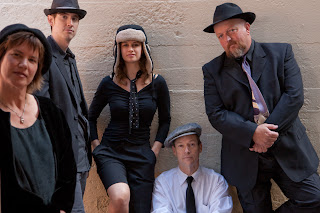 immediate musical appeal," is not an easy feat.  But neither is performing fresh, new music that somehow seeps into people's brains as music they remember hearing as a child.

By creating Café Music that could be played anywhere in the world, from Parisian Café music, Gypsy jigs and ragtime shuffles, The pickPocket Ensemble plays their music the same way they see the world...without the constricting boundaries of genre or borders.

The pickPocket ensemble could be playing in some midnight café, as patrons smile with nostalgia. Or they could be gliding down a shadowy cobblestone street, as passersby kick up their heels. Or you might have caught them at the very beginning, when a refugee from experimental electronic music started to waltz through practice sessions on a mountainside overlooking the San Francisco Bay.

(self-release; October 29, 2010), the group's latest album, to rousing and playful dance numbers swaying in odd meters. With two upcoming shows in Berkeley in November and December, the quintet promises an intimacy and immediacy that borrows gleefully from Balkan boogies, Arabic ornaments, wry French musette, and just about anything else they can get their hands on.

"Café music is almost like the inversion of folk," exclaims Corrigan. "Folk music is something deep and particular to a region or people. Café music is just opposite: We come from all the places we come from and meet in the middle." 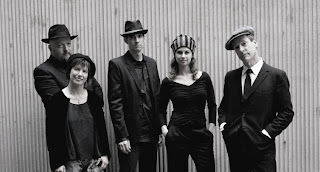 Free to play with any and all elements that catch their ear-North African blues, whirling Balkan beats, elegant Middle Eastern melodies played on the banjo, old-school waltzes-the pickPocket ensemble aims not to resemble, but to reassemble music into a new acoustic form. The group sounds like the house band at intimate night spot, where a Paris street corner, the outlines of the Atlas Mountains, or a Mediterranean village square magically flash past the windows in quick succession.

This is no gimmick; it's the way pickPocket hears the world. "You'd go into a record store and in the "world music" section everything used to be Balkanized-excuse the phrase-into countries: Greece, France, Turkey . But most musicians don't think that way," Corrigan explains. "They mix with anyone whom they can communicate with, which is why we like to talk about café music. It's not about nations; it's about intimacy, about just you and me, interacting face to face."

This face-to-face feeling and disregard for ethnic and genre boundaries give audience members from across the globe the eerie feeling they're listening to music from their childhood. "We often have fans tell us that they love a certain song, that it reminds them of music they heard as a child. The funny thing is, it's never the same song twice and never the same place twice," muses Corrigan.

pickPocket prides itself on crafting musical narratives from disparate elements. The resultant pieces sound just a breath away from the film soundtracks that inspired many of the members growing up. Yet the guiding principle that brings it all together is simplicity. Corrigan and fellow members often spend rehearsal time, not finessing the sinuous melodies or spitfire 11/8 time signatures but figuring out how to get rid of extraneous notes, until just the perfect polished essence remains.

The result:  "I remember a recent show, seeing a family of children, their parents and grandparents all getting into it," guitarist and banjo player Yates Brown recounts. "And we're playing this intricate tune in 9, and these kids are dancing to it.  It's deep music, but I think that's a telling example of how it invites people in."

To manage this feat, the group draws on diverse past experience-from klezmer (violinist Marguerite Ostro) and Balkan music, to Latin (percussionist Michaelle Goerlitz) and jazz (Berklee grad and double bassist Kurt Ribak). Brown cut his teeth on Middle Eastern and North African music playing with a traditional Arabic orchestra he met through the clinic where he works and where many of the patients are of Arabic heritage. "Next thing I know I'm bringing in the banjo to see how an oud [Arabic lute] melody might sound on it," Brown laughs. "I think that spirit of exploration and integration is very much in keeping with what I do now in pickPocket."

Corrigan, in his journey from the cerebral realms of electronic music to this vibrant and visceral vision of café music, grasped the importance of inclusive, seductive simplicity early on. "I wanted music that you just pulled out of your pocket, something very simple and direct," he explains, referring to the band's curious name. "It felt so liberating after years behind banks of wires and keyboards."

After walking away from music for an entire year in his frustration with electronic music, Corrigan woke up one day and picked up the accordion. "I used to play under a tree on Mt. Tamalpais, squeezing back and forth until I connected with the instrument," Corrigan recalls with a smile.

But he knew that to really get good at his newfound interest, he needed a gig. He pitched the idea to the owner of a local Hungarian restaurant and soon found himself playing every Tuesday evening, drawing kitchen staff out to listen and inviting musician friends to join him. This seat-of-the-pants approach transformed into a stable ensemble. The group has slowly honed its sound over ten years, led by Corrigan's sensibilities and quest for a slower, more intimate music.

"People think of what we do as old-fashioned," confides Corrigan. "We invoke a world where people gather in close together, and the acoustic quality enhances that. One fan told me our music brought her back to a place of slow conversation that she'd never known and that she missed. That's what we're trying to do."
acoustic jazz global roots music gypsy jazz live music berkeley live music san francisco pickpocket ensemble